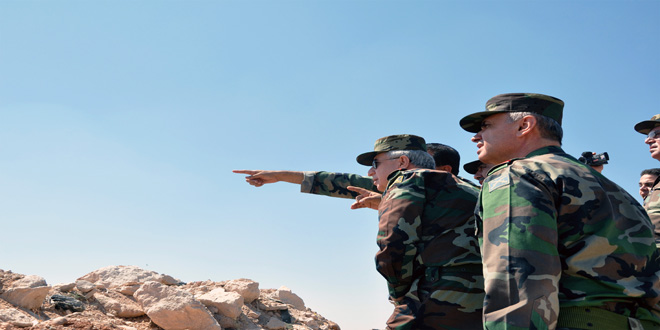 Aleppo, SANA- Upon directives of President Bashar al-Assad, Chief of the General Staff of the Army and Armed Forces, Gen. Ali Abdullah Ayyoub accompanied by a number of officers made a field tour during which he inspected a number of military formations and units operating in al-Mallah farms, Bani Zaid and al-Khalediyeh in Aleppo and its countryside.

During the tour, Gen. Ayyoub met a number of soldiers and conveyed to them the love of President al-Assad and his pride in their sacrifices in confronting terrorist organizations that ravaged and sabotaged places where they were active.

Ayyoub listened to a detailed explanation from field commanders about the combat missions carried out by the forces operating in Aleppo, the stages of implementing military operations and successes achieved by the heroic armed forces, popular defense groups and the allied forces against terrorists.

Ayyoub inspected the volume of destruction and sabotage left by the terrorist groups in the areas where they were active and provided military leaders with directives to achieve more victories and secure the necessary needs for the locals in Aleppo.

At the end of his tour, Ayyoub said that the Syrian Arab Army is determined to continue carrying out its tasks in embodiment of national and constitutional duties to protect the homeland, provide all the requirements of security and safety for the Syrian people and to restore security and stability to the Syrian territories to get rid of terrorism.

The Chief of Staff pointed out the morale of the heroes of the Syrian Arab Army and their solid will and determination to achieve victory.

In turn, the army members pledged to defend the homeland for the sake of the Syrian people who hope that victory against terrorism is imminent.