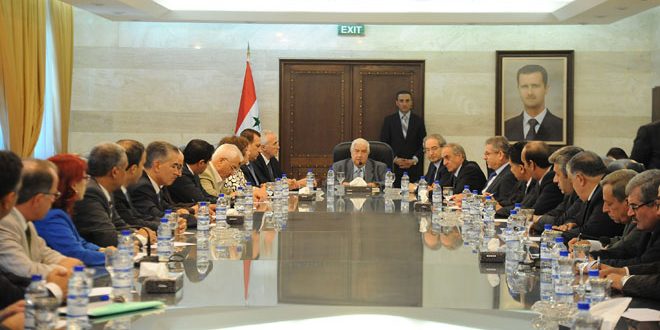 The minister gave a comprehensive political review of the developments in Syria and the latest developments on the regional and international arenas, stressing that Syria will remain strong and steadfast due to the steadfastness of its people, the heroism of its army and the public support for the leadership of President Bashar al-Assad.

Later, the minister answered the questions of the Committee’s members, pointing out to the importance of the cohesion between diplomacy practiced by Foreign and Expatriates Ministry in implementation of the directives of the President and the public diplomacy exercised by the People’s Assembly.

He expressed the ministry’s readiness to continue coordination with the People’s Assembly in the interest of the Syrian people and state.

In turn, members of the Committee affirmed their readiness to increase cooperation with the Foreign and Expatriates Ministry in a way that reflects the civilized relationship between the legislative and executive authorities to serve the interests of the people and the nation.

They expressed their confidence that victory is imminent and that the crisis will end soon thanks to the steadfastness of the Syrian people and their insistence on keeping Syria unified and independent.