Al-Jaafari: States which support terrorism in Syria have killed the essence of the UN and violated rules of the international law 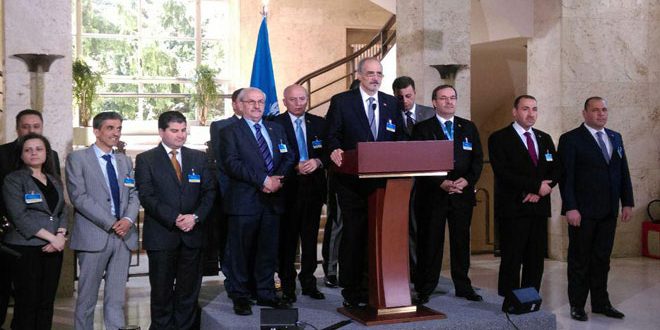 Geneva, SANA_ Head of the Syrian Arab Republic delegation to the intra-Syrian dialogue in Geneva Dr. Bashar al-Jaafari said that the fourth round of dialogue with the UN Special Envoy for Syria Staffan de Mistura was concluded.

In a press conference following a discussion session with de Mistura at the UN headquarters in Geneva on Friday, al-Jaafari added that we held an in-depth discussion focusing on several topics, the most important of which is the humanitarian situation.

“We agreed that the next round of talks on Monday would be for discussing  our amendments to de Mistura’s paper,” al-Jaafari told reporters .

“219 trucks have entered the restive areas, not to mention 65 trucks that entered al-Rastan area yesterday,” al-Jaafari added, putting the figure of the locals who received humanitarian aid in unstable areas at 1, 170,000.

“We have 6.5 million internally-displaced people who have been displaced from the areas where terrorists and armed gangs exist, 90 per cent of them are living in government-controlled areas and all of them benefit from humanitarian assistance,” al-Jaafari indicated, pointing out that 1, 700, 000 people have returned to their localities and continue to receive periodical and sustained assistance by the government.

He indicated that the Syrian government has set up 504 makeshift centers for the internally-displaced people and is providing humanitarian assistance to their residents, pointing out that the Higher Relief Committee in Syria is providing health, educational and food services according to an emergency plan already set up with financial compensation provided to those who lost their homes.

These facts take on special importance given that the enormous efforts by the Syrian government are exerted at the backdrop of economic sanctions imposed by the EU and the United States, al-Jaafari added, in addition to a boycott of the Syrian banks and banning investments in Syria.

“It has become known to all, including the UN Security Council members in New York, that there are organized networks of international terrorism supervised by certain intelligence services which are sending terrorists inside Syria across Syria’s borders with neighboring countries,” he added.

“The countries supporting terrorism in Syria have killed the essence of the United Nations and sabotaged the rules of international law,” al-Jaafari said.

Al-Jaafari: Next round of talks with de Mistura would discuss our amendments to his paper 2016-04-22
ghossoun
Share
Previous 28 ISIS terrorists killed in Hama, more hideouts and vehicles targeted in other areas
Next Lavrov: Jaish al-Islam and Ahrar al-Sham practice same inhumane approaches as ISIS 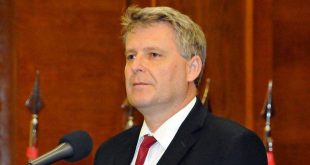