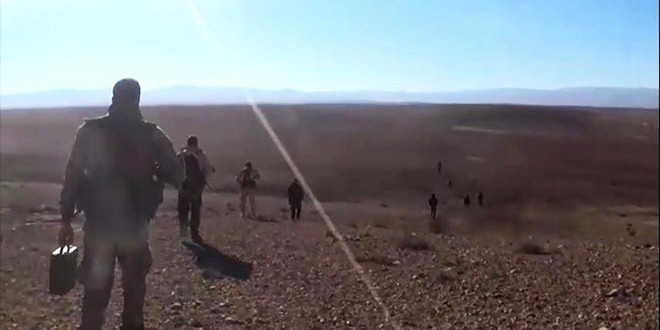 Provinces, SANA- Military operations across the country continued on Saturday, with the army units targeting terrorist organizations’ positions and dens, leaving many of their members dead or wounded.

Army units, in cooperation with the supporting forces, established control over Thaniet Homs Hill and killed members of ISIS terrorist groups who infiltrated towards al-Jbeil Mountain and Point 861 in the surroundings of al-Qaryatain city in the central Homs province, a military source announced on Saturday.

The mines and explosive devices planted by ISIS in the hill were removed and defused.

The army’s air force also targeted gatherings of ISIS terrorists and destroyed their vehicles to the west of al-Sukhneh town and Arak oil station in the countryside of Palmyra.

Gatherings of ISIS terrorists and a number of their vehicles, some equipped with heavy machine guns, were hit in army airstrikes in Jana al-Albawi, Oqeirbat and al-Rahjan villages in the eastern countryside of Hama province, according to the source.

An army unit, in cooperation with the popular defense groups, carried out a special operation in the surroundings of al-Emiyeh and al-Eliyeh villages to the east of al-Saan town during which dozens of ISIS terrorists were killed and a vehicle transporting others was destroyed.

In the same context, a source on the ground said army units clashed with ISIS terrorist groups in the surroundings of the villages of Abu Hbeilat, Abu Hanaya and Qleib al-Thawr in the eastern countryside of Hama, leaving many of the groups’ members dead or wounded.

Another army unit repelled an ISIS attack on its military posts to the south of al-Sheikh Hilal village in same countryside. Many of the terrorists were killed, while the rest fled.

The army’s air force carried out sorties targeting ISIS hideouts in al-Mrei’iyeh village in the eastern countryside of the eastern Deir Ezzor province.

Many terrorists were killed or injured in the airstrikes, as their vehicles, which had machine guns mounted on them, were destroyed, according to the military source.

In the meantime, a field source told SANA that an army unit, based on accurate intelligence information, targeted an ISIS hideout in al-Hosseiniyeh village on the northern outskirts of Deir Ezzor city.

40 terrorists of different nationalities were killed as the hideout was destroyed during the operation. 18 of the dead are from “Ashbal al-Khilafa” group as called by ISIS.

Local sources in al-Asharah village in southeastern Deir Ezzor said the popular resistance in the eastern region killed several ISIS terrorists in an ambush, including the Saudi Mohssen al-Najadi, who is responsible for recruiting young militants in ISIS.

At least 30 terrorists were killed on Friday due to clashes between their groups in Mohassan city.

Another 13 ISIS terrorists were killed Friday evening in a blast of a vehicle which they were rigging as a car bomb in al-Bu-Omar village to the east of Deir Ezzor.

In the neighboring Raqqa province, the army’s air force destroyed ISIS positions at al-Tabqa Airport in the province’s western countryside, leaving a number of terrorists dead or injured.