The army eliminates scores of terrorists, destroys a convoy of their vehicles and two car bombs 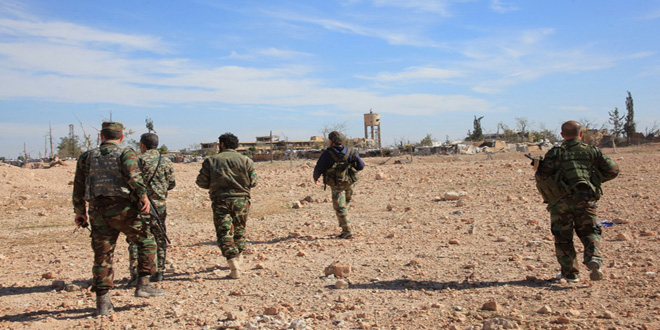 Provinces, SANA – The Syrian Arab Army continued carrying out counter-terrorism operations across the country, eliminating terrorists from ISIS and confiscating a shipment of weapons.

Army units destroyed two car bombs for ISIS terrorists before they managed to reach military posts on the outskirts of al-Bgheiliyeh village in the western countryside of Deir Ezzor province, field sources told SANA on Friday.

Other army units destroyed a ISIS convoy of vehicles, some of which equipped with heavy machineguns, on the road linking al-Jneineh with Mheimida in the province’s countryside.

The army fired artillery shells at several hideouts and gatherings of ISIS terrorists in al-Bgheiliyeh, Ayash, al-Husseiniyeh and al-Jneineh. Sites, vehicles and weapons for the terrorists were destroyed in the process.

An army unit, in cooperation with authorities, seized on Friday morning a vehicle loaded with large amounts of weapons and ammunition in the southern countryside of Sweida.

The vehicle was coming from the eastern countryside of Daraa and was bound for the terrorist organizations in the eastern desert (Badyia).

A source in the province told SANA reporter that the weapons were hidden in a fuel tank inside the vehicle and included shells and RPG shells of different kinds.

Clans fighters and popular defense forces established control over al-Shadadi city 60 km south of Hasaka city after entering the city and engaging in violent clashes with ISIS terrorists who were positioned in it, killing many of the terrorists and sending dozens more fleeing, leaving their weapons and munitions behind.

The source also said that in the province’s northern countryside, other army units eliminated two terrorist groups following a series of concentrated strikes on their fortified positions in the direction of Jaboureen and Saqiyet al-Assi, and in Beit Mansour hill, destroying the terrorists’ weapons and equipment. 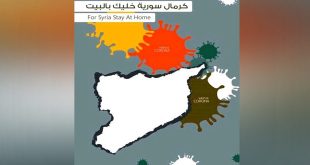 Damascus, SANA- Within their daily programs and their websites and pages on the social networking …