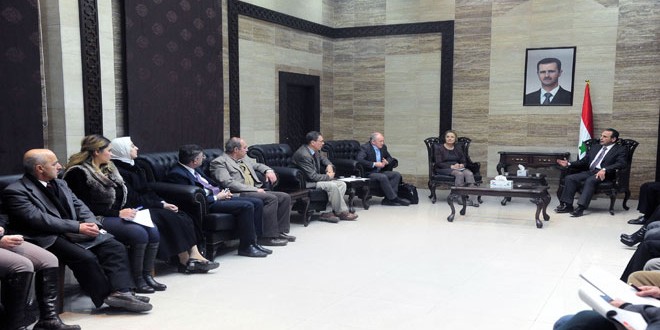 Damascus, SANA-Health Minister Nizar Yazigi affirmed on Thursday that Syria has adopted a strategic plan to deal with polio and make the county free from the disease.

The Minister, meeting Chris Maher,  director at the World Health Organization (WHO) for Polio Eradication and Emergency Support, said that no new polio cases have been documented since January 21st 2014, pointing out that the ministry carried out 17 vaccination campaigns in cooperation with the Syrian Arab Red Crescent (SARC), WHO and the United Nations Children’s Fund (UNICEF).

The minister added the terrorist organizations brought the polio virus to Syria as the first case was discovered in the city of al-Mayadeen in Deir Ezzor province, affirming that the terrorists have also hindered the process of delivering health aid and vaccines to reach the people in some areas.

In turn, Maher hailed the efforts of Syrian health ministry and the vaccination campaigns that it has carried out all over the country.

On the January 21st, 2016, a joint statement by WHO and UNICEF affirmed that Syria has completed two years without reporting any new polio cases in spite of the current conditions.