Russian Air Force destroyed 1,623 terrorist targets since beginning of its operations in Syria 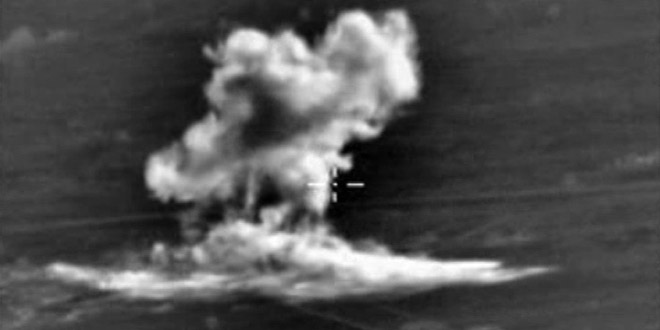 Damascus, SANA – The Russian Air Force, in cooperation with the Syrian Air Force, has carried out 1,391 sorties targeting sites for ISIS and Jabhat al-Nusra terrorist organizations within the past month, a military source told SANA.

The source said that the sorties, 291 of which were carried out during nighttime, resulted in destroying 1,623 terrorist targets, including 249 command centers, 51 trianing centers, 35 workshops for manufacturing explosives and munitions, 371 fortified sites, and 786 camps and field bases.

The Russian airstrikes, which commenced on September 30th, have been carried out in a precise manner and did not claim any civilian lives, the source asserted, adding that as a result of these airstrikes, ISIS and al-Nusra have lost any tactical initiative and have been forced to resort to defensive tactics after they suffered massive losses in their navigation systems, provisioning, vital command centers, communication stations, and infrastructure.

The source went on to point out that with the support of the Russian airstrikes, the Syrian Arab Army mounted an offensive during the past three years in the provinces of Aleppo, Idleb, Lattakia, and Homs, during which it established control over 50 towns, villages, and neighborhoods, 19 of them in Aleppo province alone.

Due to the losses they suffered, leaders of Jabhat al-Nusra in Hama province joined ISIS, the source said, adding that al-Nusra has replaced its emblems and flags with those of “Ahrar al-Cham Islamic Movement” in order to solicit political and financial support from certain states.

According to intelligence reports, Turkish, Qatari, and Emirati planes transported more than 500 terrorists from ISIS from Syria to Aden airport to have them take part in the Saudi alliance’s aggression against the people of Yemen.