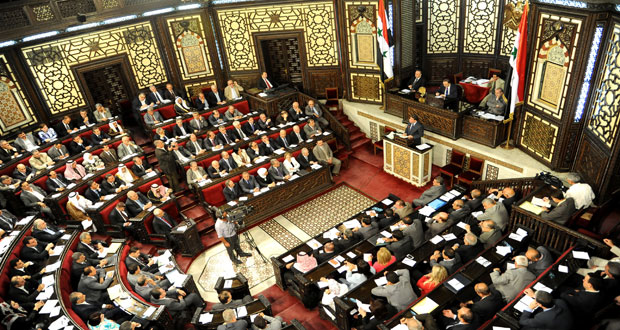 Damascus, SANA – Speaker of the People’s Assembly Mohammad Jihad al-Laham stressed that national reconciliations, which have been running at a quick pace, are the best way to “heal the homeland’s wounds” through generalizing them to wider areas.

The Speaker’s remarks came during a session of the People’s Assembly on Sunday.

Broadening the scope of reconciliations, al-Laham said, would help in containing terrorism hubs in hot pots so as to come to eliminating it and restoring services and normal life to citizens.

He considered that the Syrian people are able to face the big challenges and difficult risks through unity and cooperation on the various fronts.

This ability to overcome challenges, he added, can be “either through dialogue -wherever possible- and by means of arms – where dialogue is turned down.”

The Parliament’s Speaker offered thanks to all figures and organizations, be it official or civil, that have contributed to achieving and ripening reconciliations.

“The Syrian people have had their say and made their decision by opting for the political track their own way, and those who are with [the Syrian people] must back their choice, or else keep silent and respect their will,” said al-Laham.

“No internal or external party, be it international organizations or governments, have the right to confiscate the people’s will under any pretext or name,” he added.

PM: Main tasks are to uproot terrorism and set up national reconstruction project

Addressing the People’s Assembly, Prime Minister Wael al-Halqi said the government has major tasks ahead of it in the coming period, mainly that of rooting out terrorism whenever it exists on the Syrian land, enhancing the armed forces’ steadfastness through securing their requirements and going on with national reconciliations. Al-Halaqi, highlighted the importance of having on board all national, political and societal powers in the decision-making process as building the homeland is the responsibility of all Syrians.

He also cited the task of creating the appropriate conditions for externally displaced citizens to ensure their return and looking after the martyrs’ families.

The Premier highlighted the Foreign and Expatriates Ministry’s role in keeping the international organizations updated on events in Syria and its efforts in defending its citizens against terrorism, referring also to the Ministry’s “precise and full’ implementation of its obligations as far as Syria’s chemical weapons elimination is concerned.

Al-Halqi hailed the accelerated pace at which relief work in Syria has been proceeding, leading to good results.

While asserting the continuation of this work, the Prime Minister reiterated stress on confronting all foreign attempts to politically exploit the humanitarian file in Syria and undermine the national sovereignty by asserting the main international principles regulating the UN’s role in aid delivery.

On the economic level, al-Halqi affirmed that the Syrian economy is still firmly holding its ground as all the basic and social services are being provided despite the escalated economic sanctions imposed on the country and the terrorists’ incessant attacks against facilities and infrastructure.

He stressed the need that the reconstruction process in Syria be launched in the framework of an integral comprehensive national development project.

To this effect, he added, efforts of public and private sectors need to be combined, with focus placed on developing mechanisms and means to attract capitals and expert human resources and secure funds.

He promised that the government will go on with its policy of subsidizing energy and food stuff rationally in a way that maintains social and economic stability.

Work, he added, will continue to keep the price of the Syrian pound stable against foreign currencies and support the agricultural sector being a strategic choice for food security.

During the session, Assembly members’ discussions focused on the need to provide citizens’ needs of food and consumer products and improving their living conditions, in addition to restoring security to all areas, caring for martyrs’ families, addressing the issue of the displaced and missing people, continuing reconciliations, beginning reconstruction, and supporting development and services sectors. Responding to the members’ queries and questions, Premier al-Halaqi said that terrorist groups steal around 50,000 to 60,000 barrels of oil each day in Hasaka and Deir Ezzor provinces, with part of that oil being refined and sold in local markets while the rest is smuggled to Turkey.

He said that renewing work contracts made through the youth employment program is based on establishments’ needs, and that around 119 state workers were reinstated after studying their pleas, asserting that raising salaries for state workers is one of the government’s top priorities.

Al-Halaqi said that his recent visit to Aleppo showed that basic food materials are available in large quantities and at prices lower than those in Damascus by around 40-50%, and that flour, bread, and petroleum products are available at reasonable prices.

He noted that the government made a decision 5 weeks ago to provide monetary aid to injured army personnel who sustained injuries that caused permanent disability.

The Premier also said that 12,000 food baskets and 8,000 packages of canned food were delivered to Hasaka province via Nsaibin border crossing point and distributed by the local relief subcommittee.

Regarding combating corruption, he said that 961 heads of administrative units and 823 members of local councils were relieved of their duties, and some of them were referred to the relevant authorities for investigation.