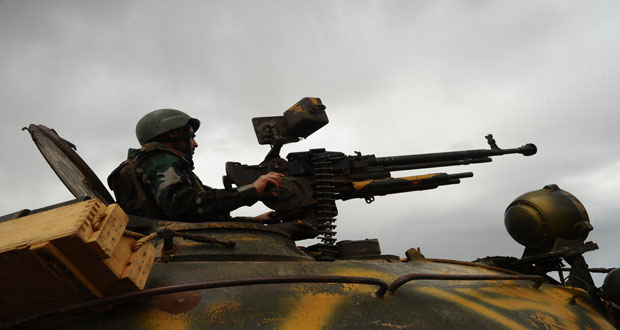 Provinces, SANA – Units of the army and armed forces carried out direct blows to the terrorist organizations’ positions and dens in many areas across the country, inflicting heavy losses upon them in personnel and equipment.

A unit of the army and armed forces carried out concentrated blows against hideouts and positions of Jabhat al-Nusra and other terrorist organizations affiliated to it in Mutaneh village in the eastern countryside of Quneitra southern province, a military source told SANA Monday.

The army operations resulted in the killing and injuring of scores of the terrorist organizations’ members and the destruction of their weapons and ammunition, the source added.

The terrorist organizations admitted on their social media website the killing of a number of their members including the so called ” Khalil Ibrahim al-Omar.

An Army unit clashed with an armed terrorist group in Tal al-Bazak east of Quneitra countryside, killing all the group’s members and destroying two of their vehicles with all ammo and weapons inside.

A number of Jabhat al-Nusra terrorists were killed during Army intensive strikes against their dens in Mashara and Tranja villages in north and northeast countryside of Quneitra.

Units of the army and armed forces destroyed a number of Jabhat al-Nusra and the so-called al-Muthana Islamic Movement’s vehicles and supply lines in Daraa southern province.

An army unit carried out precise operations against the Takfiri terrorist organizations’ positions and movements on al-Sad in Daraa al-Balad.

The source added that the army operations resulted in the killing of a number of terrorists and the destruction of their vehicles, weapons and ammunition.

Meanwhile, the terrorist organizations admitted on their social media websites the killing of a number of their members, among them the self-claimed Amir Ahrar al-Cham Islamic Movement in Daraa Ghassan al-Hariri, nicknamed Abu Hamzeh, and
the so called terrorist Abu Yaqoub al- Sharae and Ahmad Abdul-Rahman Abdel-Razaq al-Zoubi, who died in one of the Jordanian hospital.

In the neighboring province of Damascus Countryside, an army unit killed a number of terrorist organizations’ members in Beit Jin, Drousha and Khan al-Sheeh Farms in the province.

Later, army units and Lebanese Resistance destroyed two ISIS hideouts in Qara in al-Qalamoun, killing scores of the terrorists hiding in them.

Moreover, an army unit killed a number of the Islamic State in Iraq and Syria (ISIS) terrorists who tried to infiltrate into Maksar al-Hosan village from al-Shoumariyeh Mountains in the eastern countryside of the central province of Homs.

Earlier, army units foiled an attempt by a terrorist group to infiltrate to military points in al-Masasina, al-Boida and Markaba in the northern countryside of Hama.