Mikdad: protecting Palestinians in al-Yarmouk Camp is a priority of the Syrian government 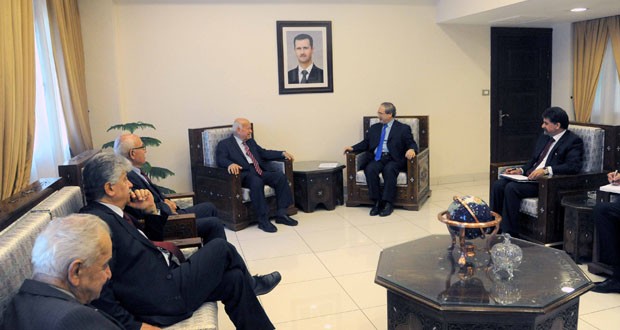 Damascus, SANA – Deputy Foreign and Expatriates Minister Fayssal Mikdad said that the Palestinian people in Syria are paying the price for their adherence to their right to return to their homeland and build an independent state, and that the terrorist attacks on Palestinian camps in Syria are part of a plot concocted by Israel along with its western and Arab allies.

Meeting a delegation from the Palestinian Liberation Organization (PLO) on Tuesday, Mikdad stressed that the Syrian government is doing its best to alleviate the suffering of the people of Yarmouk Camp, noting that the government provided shelter and aid to the people who fled the camp and even delivered aid to those who remained inside it.

The Deputy Minister held the countries that sponsor terrorists in Syria – specifically Turkey, Saudi Arabia, and Qatar – responsible for the tragedy that took place in Yarmouk Camp, affirming the need to pressure these states to stop the terrorist attacks on Palestinian camps in Syria, including Yarmouk Camp.

He also asserted that the Palestinian cause will remain a primary concern for Syria and the basis of its strategic political action.

For his part, head of the PLO delegation Zakaraya al-Agha said the coordination is ongoing in order to alleviate the suffering of the people of Yarmouk Camp, saying that there is agreement between the PLO and the Syrian government regarding the situation in the camp and how to deal with it, adding that the Palestinian leadership respects Syria’s sovereignty and supports the steps taken by the government to defend its land and people.

In this regard,  Mikdad stressed that protecting the Palestinians in al-Yarmouk Camp is the top priority for the Syrian government.

Mikdad said in a phone call with the Syrian TV that the meetings with the PLO and the previous relevant meetings were aimed at taking a unified stance regarding the crimes committed by the terrorist organizations against the Palestinian people.

He added the Syrian government used all resources and capabilities to deliver humanitarian aid and protect the Palestinians in the Camp right after the terrorist organization of ISIS entered the area, adding that the government helped secure the evacuation of locals from the camp and provide makeshift centers for them.

Mikdad affirmed that at the same time when the Syrian government is exerting all efforts to protect the Palestinians from the ISIS crimes, the US is trying to issue a UN resolution that actually supports the ISIS in its crimes, which are part of the crimes committed by Israel against the Palestinians.