US promotes impunity for neo-Nazis in Ukraine — Russian embassy 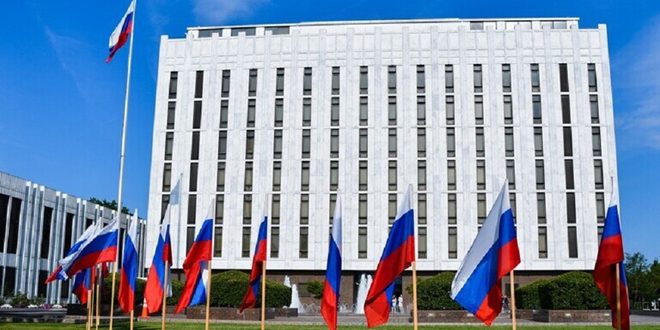 WASHINGTON, SANA-The US authorities, who cover the crimes of Kiev, contribute to the feeling of permissiveness and impunity of Ukrainian neo-Nazis, the Russian embassy in the US said in a commentary published on Monday.

The diplomats stressed that the shooting of Russian prisoners of war by the Ukrainian armed forces “is a gross violation of the Geneva Convention on the Treatment of Prisoners of War of 1949.” “We emphasize again: Ukrainian prisoners of war are being held in full accordance to international humanitarian law provisions.

The Kiev regime has not yet been punished for its crimes. In fact, the United States and the collective West does not even criticize the Ukrainian authorities,” the diplomats said.

“Isn’t it clear that the United States enables permissiveness and impunity for neo-Nazis in Ukraine by covering up the frenzy of Ukrainian bandits?” the Russian embassy noted.

The diplomats stressed that they have drawn attention to remarks by US Ambassador-at-Large on International Criminal Justice Beth van Shack about the shooting of Russian prisoners of war by the Ukrainian armed forces. “he official refused to directly condemn the massacre of our unarmed soldiers, despite the confirmation of the authenticity of the relevant video materials by American journalists, who did not hush up the tragedy.

The diplomat cynically referred to the fact that the ‘war crimes’ of the Russian Army are recorded ‘many times more often’ than those by the Armed Forces of Ukraine. At the same time the State Department yet again failed to provide any evidence of violent acts allegedly committed by our servicemen,” the commentary said.

In the West, the embassy continued, “everything is very quickly ‘forgotten’”. “How about such blunt examples as the murder of Daria Dugina, the attacks on the detention facility in Yelenovka and the railway station in Kramatorsk, the bombardent of Donetsk residential districts, the tragedy in the Trade Union House in Odessa on May 2, 2014? Any normal person shudders and rejects such atrocities. We will never forget the horrendous killing of unarmed soldiers who were forced to lie on the ground by neo-Nazis and then ruthlessly shot,” the diplomats pointed out.

“How can this be justified? How can the Administration explain its callous attitude towards the death of ordinary warriors to their mothers, wives and children? Where is the proverbial idea of “human rights first” which Washington is so proud of? This is double standards at its finest,” the embassy said.

According to it, “condoning the crimes of the Kiev regime and ignoring them, Washington supports murderers who deserve no forgiveness or justification.” “It is high time to strongly condemn the acts of neo-Nazis. One must always remember: “For they have sown the wind, and they shall reap whirlwind,” the embassy concluded.

Earlier, Russia’s Investigative Committee opened a criminal case over a mass execution of captured Russian soldiers by the Ukrainian military. As the press service of the Investigative Committee said on Friday, the criminal proceedings were launched over a video showing the Ukrainian military shoot at least 11 unarmed Russian servicemen, captured on the territory of the Lugansk People’s Republic.