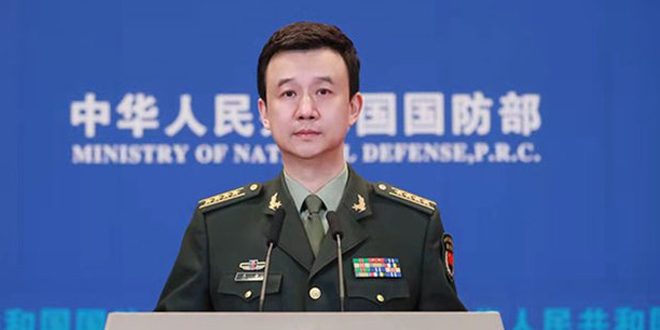 Beijing,  SANA- China has stressed the countermeasures taken in response to the Speaker of the U.S House of Representatives Nancy Pelosi’s visit to Taiwan are justified and appropriate.

“The current tensions across the Taiwan Strait result solely from the provocations from the U.S. side. Thus, this side must take full responsibility and face the grave consequences”, Xinhua said Monday, Citing Wu Qian, the spokesperson with China’s Ministry of National Defense.

The Spokesperson added “The Chinese side had made clear its stern position regarding China-U.S. relations, the relations between the two militaries and the Taiwan question, and had repeatedly lodged solemn representations to the U.S. side regarding Pelosi’s Taiwan visit.“However, the U.S. side’s actions betrayed their commitments” he noted.

“The Chinese side’s countermeasures are necessary warnings to the U.S. provocations, justified actions of safeguarding national sovereignty and security, and are reasonable and appropriate”,Wu emphasized.

He urged the U.S. side to earnestly respect the Chinese side’s core interests and major concerns, do away with the illusion of “containing China with Taiwan,” and refrain from going further down the wrong path.