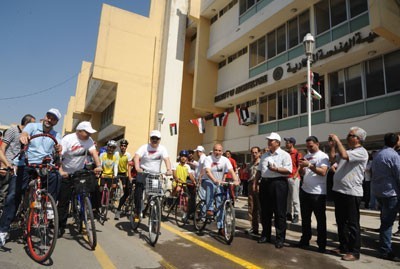 Damascus, (SANA) The first phase of ‘Green Road for Bicycles” was launched Saturday by the Faculty of Architectural Engineering of Damascus University in cooperation with the Syrian Union of Bicycles.

The project aims to secure a 1.2 km road for bicycles among 15 educational blocks and 9 administrative buildings within the university’s campus in al-Baramkeh, which extends between al-Jamarek Square to al-Halbouni area.

Rector of Damascus University Mohammad Amer al-Mardini told SANA reporter that the project sends a message to the various spectra of society, particularly the youths, promoting riding bicycles as environment-friendly- and most importantly comfortable- means of transportation.

He encouraged university students, teachers and workers to use this means, especially under the current circumstances in the country, hoping that the freshly opened phase can be “a kernel” for a large-scale project on the level of the whole city of Damascus.

The project seems to acquire an increasing importance given that citizens have been having difficulty with regard to transportation and movement due to roads in most cities and areas getting clogged with traffic caused mainly by displacement of terrorism-fleeing people to safer areas.

Chairman of the Syrian Union of Bicycles Mohammad Khudr noted that the project includes carrying out 18 bike parking lots, each includes 12 stands for public and private bikes.

The Union is seeking to change some of longstanding habits in the society with a view to spread the culture of riding bikes, said Khudr, adding that this can be done by starting with cutting reliance on vehicles and promoting bikes in the streets, compounds and main cities.

There are four more phases to be completed within the project, in whose first phase 60, including Master’s, students took part, particularly in marking roads and building parking lots. 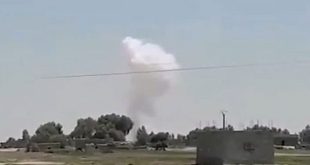