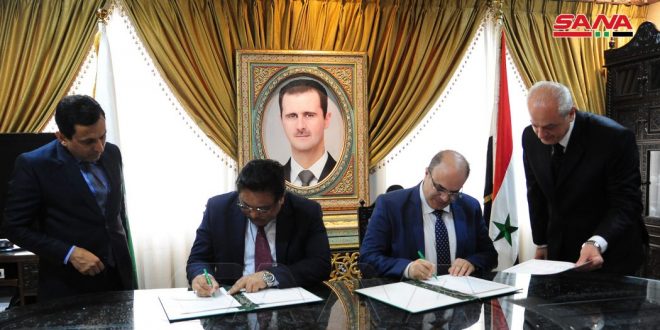 Damascus SANA – Syria and Pakistan have signed on Sunday a Memo of Understanding (MoU) on formation of joint working group for commercial and economic affairs, including representatives from the ministries and the bodies concerned of the two countries.

The MoU was signed by the Syrian Economy and Foreign Trade minister, Dr. Samer al-Khalil ,and Pakistani Ambassador in Damascus Saeed Muhammad Khan on behalf of the Minister of Commerce of Pakistan.

The five- year memorandum aims to find a mechanism of following up on developing the commercial and economic relations between the two countries, particularly implementing investment projects, commercial deals, organizing exhibitions and forums, and exploring opportunities and fields of cooperation.

Al-Khalil told the journalists that the relations between the two countries are witnessing a tangible development on the economic and commercial levels.

He noted that volume of trade exchange between the two countries has doubled by 100 percent during the first nine months of the current year compared to the same period in 2020.

He affirmed that the joint working committees will be an important tool to upgrade the level of trade relations between the two countries and mobilize energies in the field of the business sector to strengthen investment and trade exchange.

For his part, the Pakistani Ambassador stressed that MoU will open new horizons for cooperation in the economic field and activate the bilateral trade exchange.