Algerian Ambassador in Damascus:  We are keen to strengthen bridges of communication with Syria 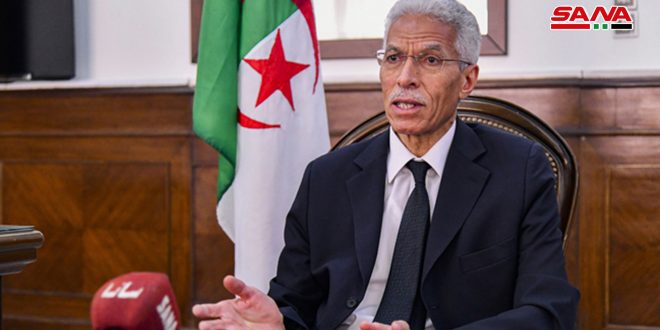 Damascus, SANA- Algeria commemorates this Monday, November 1, the 76th anniversary of Algerian Revolution which was a great achievement where the Algerian people offered great sacrifices while the principles and ideals of this Revolution have become an approach followed by the peoples of Africa, Asia and Latin America in their struggles for liberation from colonialism.

In an interview with SANA, Algerian Ambassador in Damascus Lahsan Tuhami said that the Algerian Revolution culminated the struggle of successive popular resistance against the colonialism in the country, on top the resistance of Abd al-Qadir al-Jazaeri whose heroic, intellectual and humanitarian feats have enriched the world civilization, while his residence in Damascus strengthened the Algerian-Syrian relations.

“The relations between the two countries have always been characterized with popular cohesion by the leaderships of both countries to strengthen the bridges of communication, consultation and coordination throughout the meeting that brought together the foreign ministers of both countries on the sidelines of the 76th session of the United Nations General Assembly last September,” the Ambassador affirmed.

Tuhami noted that there is sincere and common desire of the two sides to seek chances of available partnership to supporting the bilateral relations in different domains.