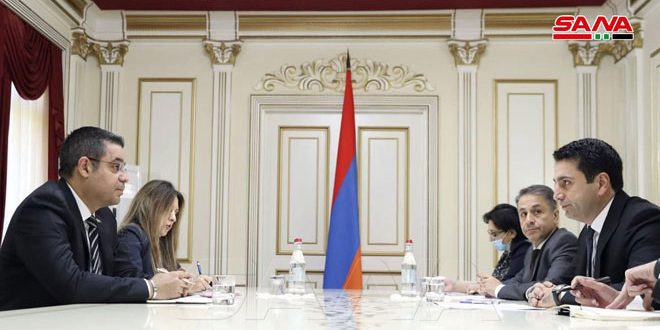 The two sides reviewed the destructive role played by the Turkish regime in the region and its destabilizing policy, including cutting off water in the northern Syria, especially Hasaka, and putting pressure on the people there to bring about a demographic change in the region. The two sides underlined the importance of the mutual parliamentary visits to boost the relations between both countries in various fields, especially the economic one.

Simonyan pointed out the importance of Syria to Armenia, as Syria hosted the survivors from the massacre that committed by the Ottomans against the Armenian people.

For his part, the Ambassador reviewed the situation in Syria and its fight against terrorism, pointing to the sacrifices of the Syrian Arab Army and the steadfastness of the people, which contributed to the recent victories over the terrorists.

He congratulated Simonyan for electing him as a Speaker for the Armenian Parliament, as he extended his congratulations to the Armenian people on the occasion of the successful parliamentary elections that were held lately.

2021-10-12
nisreen
Share
Previous Processes of settling status of gunmen and the wanted in Saida, Daraa countryside completed
Next Syrian-Iranian talks to boost economic and investment cooperation