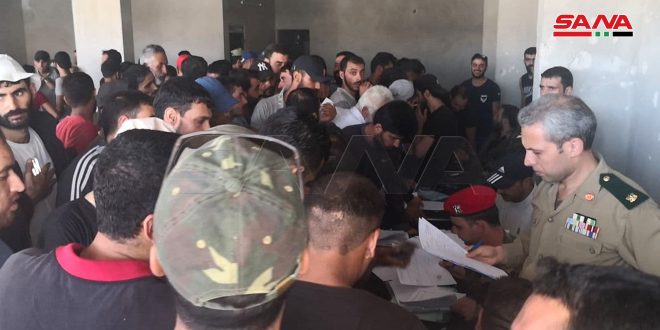 Daraa, SANA-The operations of handing over weapons and settling legal status of scores of militants from Daraa al-Balad resumed on Monday at the settlement center in al-Arbaeen neighborhood, as part of the implementation of the settlement agreement granted by the state, which provides for the exit of the terrorists, settling of the militants’ legal status and handing over of weapons.

SANA reporter said that the weapons, which have been handed over, included individual light weapons, machine guns, RPGs, and a number of various shells, adding that other centers will be opened all over the city to complete the operation of settling the status of the militants and handing over their weapons to the Syrian Arab Army, in preparation of the army’s deployment in Daraa and the return of the state institutions to it.

The terrorist groups which control the destiny of Daraa al-Balad citizens, have several times hindered the peaceful settlement agreement granted by the state.

The Syrian state has been working for several weeks to establish security and stability in Daraa province and to give priority to peaceful solutions in order to save the civilians’ lives and preserve the infrastructure.