Ali Adeeb Palace in Jableh… a heritage and historical landmark 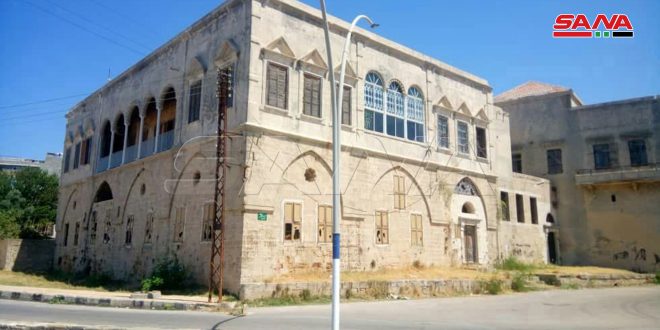 Lattakia, SANA – Ali Adeeb palace, with its distinguished façade that overlooks the seafront of Jableh city Corniche , is considered as one of    heritage and historical landmarks and an example of urban style in the Eastern Mediterranean region. “The palace, which occupies an area of approximately 1,500 meters,  is located in the northwest side of the old city of Jableh at the end of the Mufti Alley, which extends from Souk al-Tijjar “merchants market “area to Jableh port, overlooking the seafront of city’s Corniche , and it was built during several stages ,”head of  Jableh Antiquities Department, Dr. Masoud Badawi told SANA reporter.

Badawi added that the ground floor of the eastern block is considered to be the oldest which dates back to the end of the Mamluk period and other parts were built mainly in 1862 as a residential building and for guests at the same time. Badwi described the palace as “al-Beiruti House” in light of the urban style for the inhabitants of the Middle East like Palestine and Lebanon with stylistic variation, pointing out that this style is not used in our current time, adding that the palace is located within the architectural fabric of the ancient city of Jableh and the city is registered in the National Heritage List of the General Directorate of Antiquities and Museums in 1998..

Inside the eastern part of the palace, a part of the contents appears, such as an old laundry and semi-destroyed rooms, including a room called (Al-Karar), in which old supplies were placed in pottery jars, such as meat and eggs, in addition to a well that supplied water to the second floor from the ground floor.