President Putin in message to Syrian Child Iman: “By virtue of you, Syria will have good future” 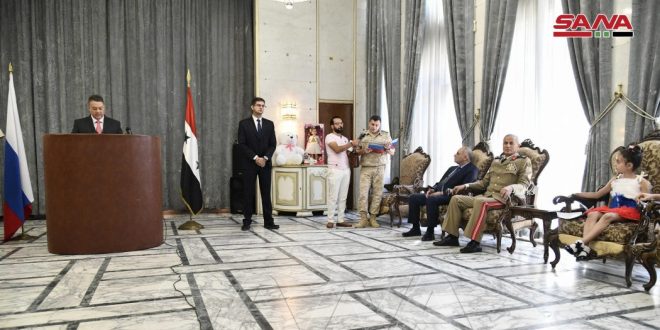 Damascus, SANA-Russian Defense Ministry held a celebration at the Russian Embassy in Damascus, during which Deputy chief of Staff of the Russian Armed Forces conveyed a message from President Vladimir Putin of Russia to child Iman Nibras Ali who has previously sent a message to President Putin talking about the return of peaceful life to Syria thanks to the efforts of the two countries.

“You know that leadership of Russia does its best to restore the normal life to the Syrian children … we will continue offering assistance to the Syrian people in the fight against terrorism, and I have confidence that, by virtue of talented children like you in Syria, and the open spirit, the Syrian State will have a good future when all dreams and aspirations would be achieved,” President Putin said in the message.

She thanked the leaderships of both countries, represented by Presidents Bashar al-Assad and Vladimir Putin, for their efforts to let peace prevail and their amity and patronage, demanding the world to disallow the return of terrorism and help rebuild what has been destroyed by terrorist organizations.