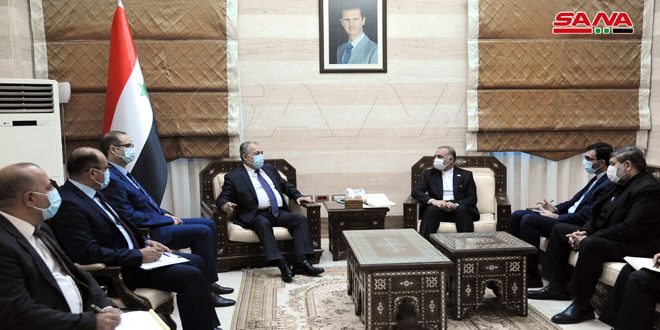 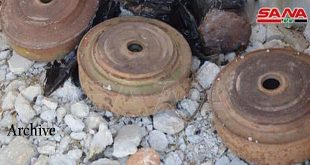 Damascus, SANA- Prime Minister Eng. Hussein Arnous received on Sunday Iranian Ambassador in Damascus Mahdi Sobhani and the accompanying delegation as the two sides discussed the steps taken at the level of implementing the joint agreements and cooperation projects between the two countries, the stages which they have reached and means to develop them.

Both sides underlined the importance of enhancing cooperation and joint work in the domains of industry, energy, investment, trade, ports, transport, communications, agriculture, pharmaceutical industries, and other issues of joint cooperation, in addition to overcoming the obstacles hindering the implementation of joint projects and speeding up their implementation in a way that would contribute to facing the unjust economic siege imposed on the two friendly countries and peoples.

Talks during the meeting also tackled the underway joint projects which would contribute to increasing production and securing various commodities and basic materials needed by the Syrian market, as well as the rehabilitation of a number of the factories.

Eng. Arnous underlined the importance of increasing the joint cooperation projects, and opening new horizons for cooperation between the two friendly countries on all levels, expressing the readiness of the government to provide all the facilitations to accomplish the joint vital and developmental projects in a way that would contribute to providing more job opportunities and achieve economic development in Syria.

He expressed thanks for the Iranian leadership, government and people for their standing by the Syrian people in the fight against terrorism.

The Iranian Ambassador, for his part, asserted that his country will continue to provide support for the Syrian people in the face of the unjust sanctions imposed on them, and in the stage of reconstruction.

He highlighted the importance of exerting all possible efforts to upgrade the bilateral relations and cooperation and to go forwards in implementing all the joint projects which would serve the two friendly countries.

2021-08-22
ruaa-jazaeri
Share
Previous US occupation brings out 25 tanks of stolen Syrian oil to north Iraq
Next US occupation carries out an airdrop in Deir Ezzor countryside ,kidnaps a number of civilians 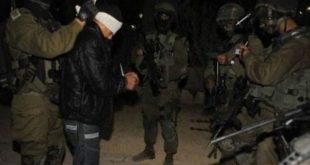