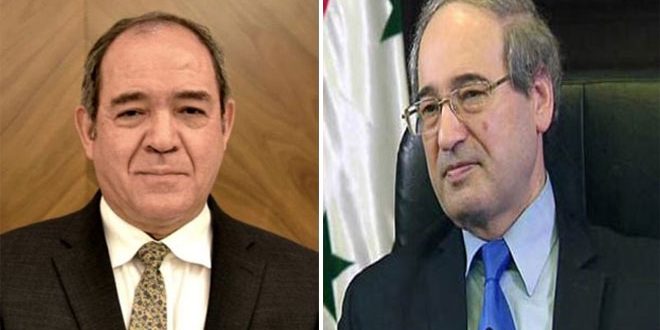 Damascus, SANA- Foreign and Expatriates Minister, Faysal Mikdad, discussed on Thursday with Minister of Foreign Affairs of the People’s Democratic Republic of Algeria, Sabri Boukadoum, the latest developments in the Arab region and world, bilateral relations and means of enhancing and developing them in the interest of the peoples of countries.

Mikdad, in a telephone call with his Algerian counterpart, congratulated Boukadoum on fulfilling the recent legislative elections in Algeria, stressing Syrians’ support to the Algerian brothers in fulfilling their constitutional entitlements and enhancing the potentials of their country for the prosperity of fraternal Algeria.

He briefed Boukadoum on the latest developments in Syria, affirming the Syrians’ determination to combat all forms of terrorism and occupation until liberating the whole territories and restoring the security and stability to it.

Mikdad stressed that enemies of Syria will fail to achieve,  through politics, what they have failed on the ground.

He presented Syria’s stance regarding attempts of the west to politicize the file of the humanitarian aid, affirming that Syria rejects any violation to its borders, sovereignty by any side and under any pretext.

Algerian Foreign Minister, for his part, stressed the importance of relations with Syria, expressing Algeria’s support for Syria in its war against terrorism and its support for Syria’s efforts to restore security and stability to all its territories.

Boukadoum also expressed Algeria’s readiness to coordinate with Syria in various fields, enhance mutual consultation and coordination between the two countries at all levels, whether with regard to bilateral relations or developments of the situation in the region.

2021-07-01
m.eyon
Share
Previous “Made in Syria” shopping festival opens in Damascus
Next Prime Minister affirms important role of contractors in the reconstruction process