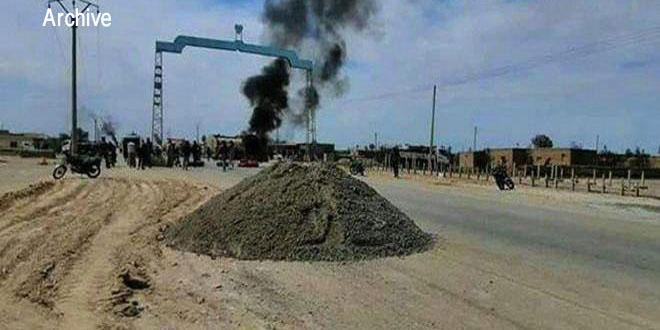 Deir Ezzor, SANA- A number militants of the US occupation-backed QSD militia were killed and others were injured in separate attacks launched by the popular factions against their positions and checkpoints in the countryside of Hasaka and Deir Ezzor.

Local sources told SANA reporter in Hasaka that “a landmine went off in a military position for the QSD militia within the silos in Tal Hamis in Qamishli countryside as a number of the militia’s members were killed and others were injured.”

In Deir Ezzor, sources told SANA that “the popular factions opened fire at a post for the QSD militia in al-Hussan village, west of Deir Ezzor, killing one of the militia’s gunmen.”

The attacks have continued on positions of QSD militia in the Syrian al-Jazeera region, in a response to the escalation of the militia’s attacks on civilians, as last Thursday, one of its gunmen was killed in a shooting that targeted one of the militia’s cars in Sweidan al-Jazeera village in Deir Ezzor eastern countryside.