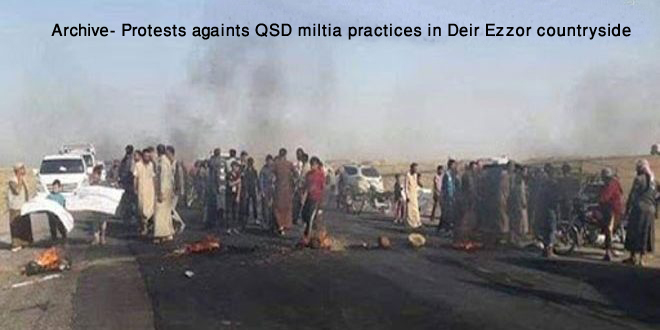 Deir Ezzor, SANA-  Five militants of US occupation-backed QSD militia were killed in an attack by the popular factions on a military vehicle affiliated to the militia in Deir Ezzor western countryside.

Local sources told SANA that a group of popular factions ambushed a car affiliated to QSD militia in the vicinity of the town of Jazra al-Milag in Deir Ezzor western countryside, and attacked  it with machine guns,  killing 5 militants and causing damage to the car.

Attacks targeting QSD militia gunmen who are linked to the US scheme in the Syrian al-Jazeera, continue as on Thursday a gunman was killed, due to an attack by popular factions with machine guns on the car he was driving, in the village of Sweidan al-Jazeera in the district of Thiban in the eastern countryside of Deir Ezzor.