Putin: We will continue to support Syria in combating terrorism, resolve international issues through dialogue 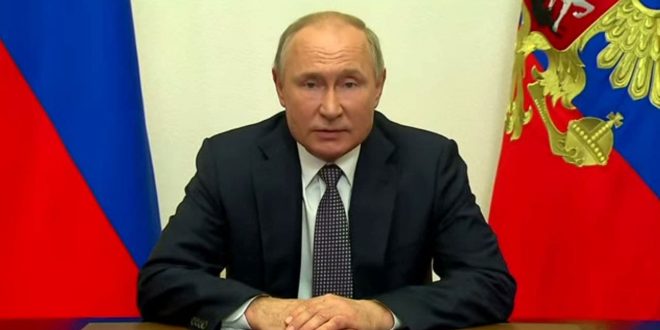 In a speech at the opening of the IX Moscow Conference on International Security on Wednesday, Putin said that the international security and law system are crumbling and the geopolitical turmoil, threat of terrorism and mass destruction weapons are increasing, in addition to that attempts to use force to achieve personal interests and enhance private security at the expense of others’ security continue.

He noted that these challenges require concerting efforts of all countries for the joint action on the basis of international law and UN charter to prevent outbreak of a new world war.

The Russian President indicated that Russia does not impose its will on other countries, asserting that it will exert all efforts to calm down the conflicts and resolve the international problems through dialogue.

He added that most of the Syrian territories have been liberated from terrorist organizations, saying that Russia will continue to back Syria to face terrorism until eliminating it, as well he affirmed Russia’s keenness on its relations with the neighboring countries to achieve their security and prosperity.

In turn, Russian Defense Minister, Sergei Shoigu said that “Moscow conference will open new prospects for resolving the international issues, asserting the importance of international cooperation in this regard, instead of imposing sanctions that destabilize security.