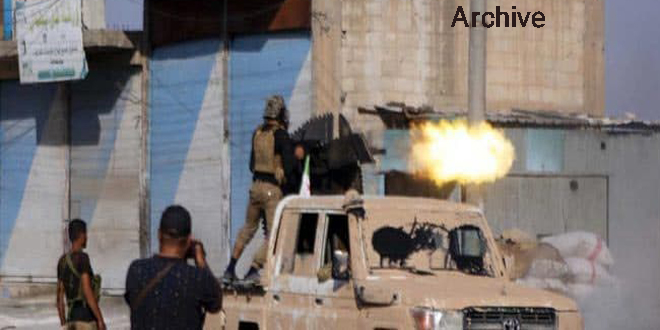 Aleppo, SANA- A number of the Turkish occupation mercenaries of terrorist organizations were injured in infighting among them in the environs of the occupied city of Afrin in Aleppo northwestern countryside.

Local sources told SANA that an infighting with light and medium weapons erupted between terrorist groups of the so-called “Jaysh al-Nukhba” and the so-called “Suqour al-Shamal” which are backed by the Turkish occupation on the outskirts of Omar Simo village in Afrin Environs, causing the injury of a number of terrorists and material damages to some of the locals’ property.

The sources added that the clashes also caused a state a panic and fear among the locals who were forces to leave their jobs and hide in their houses for a long period due to this infighting among those mercenaries which takes place almost daily.

The areas which are under the control of the Turkish occupation and its mercenaries have been witnessing a state of chaos and infighting among the terrorists who control the fate of the locals in these areas.