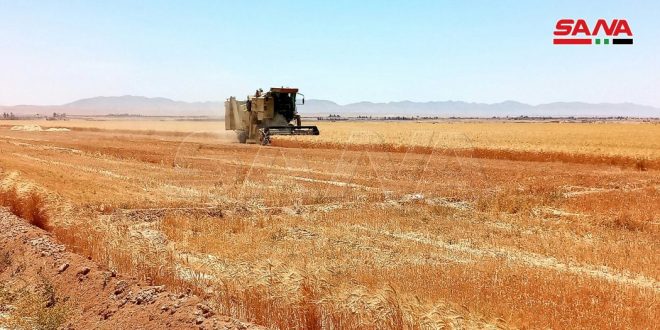 Palmyra, SANA-After 7-years hiatus because of terrorist attacks, farmers in western al-Biyarat area in Palmyra countryside returned to harvesting the wheat crop in their lands.

In a statement to SANA reporter, Head of Palmyra Agriculture Department, Ahmed Youssef, said that the area planted with wheat in Western al-Biyarat area reached 26,000 dunums , of which about 5,000 dunums were harvested so far.

Farmer Khaled al-Abbas harvests wheat in his land, which has an area of about 600 dunams.

He said that the fertilizer and fuel provided to farmers by the State contributed to reducing production costs.