Journalists: Participation in presidential elections is a sovereign decision 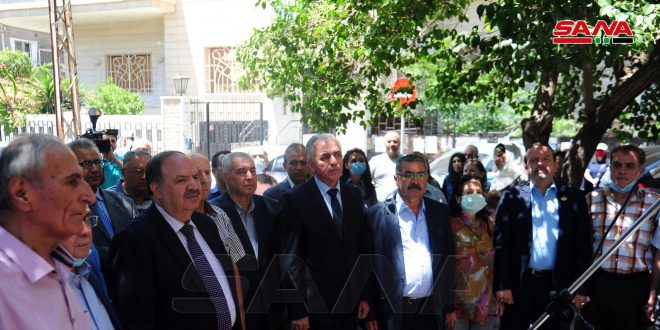 Damascus, SANA- In support of the constitutional entitlement scheduled on May 26th , and upon the invitation of the Union of Journalists, a number of Syrian and Arab Journalists gathered on Monday in front of the Union HQ in Damascus.

Head of the Union, Mossa Abdel Nour, stressed in a speech that participating in the presidential elections is a sovereign Syrian decision and no one has the right to interfere in it.

Abdel Nour added that the efforts exerted by journalists in any event Syria passes through are still at the level of challenge and they are going ahead with all their energies and capabilities until victory is achieved.

Journalists from Iraq and Lebanon affirmed in a statement to SANA the unity of the path and destiny, adding that the battle is one in the face of the forces of aggression and colonialism.

2021-05-24
m.eyon
Share
Previous People and sailors of Baniyas support constitutional entitlement in their own way (photos)
Next With Syria’s participation, the 74th session of the World Health Assembly starts activities