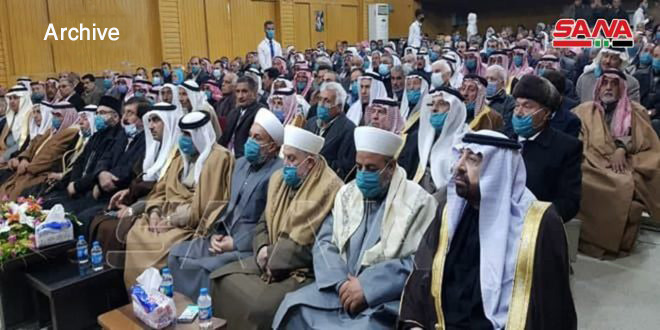 Hasaka, SANA – The Arab clans and tribes called for rejecting the Turkish and US occupations as well as activating the popular resistance as an option to expel the occupiers and stop daily violations against Syrian people, announcing their support to the constitutional entitlement.

Tribe of BouShalhoum in Hasaka affirmed that Syria’s power lies in the unity of its people and their standing together in the face of all challenges, in addition to the adherence to the territorial integrity.

Meanwhile, Arab Adwan tribe affirmed in a statement their rejection of the US and Turkish occupations, calling on the international community and UN to stand by the Syrian people, lift the blockade imposed on the country.

In Turn, clan of Sarij al-Taei’a reiterated their national stance in supporting of the victories of Syrian Arab Army in its war on terrorism and backing the presidential elections.