Denmark tells Syrian refugees: You can return to your homeland, to sunny Syria as your country needs you 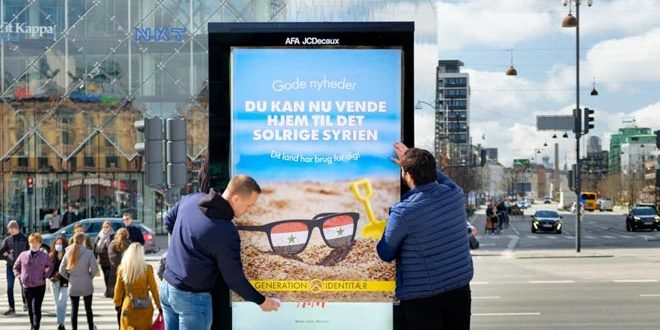 Capitals, SANA – “Now you can return home to sunny Syria, your homeland needs you “ is a phrase spread widely on billboards in streets of Copenhagen, the Danish capital, in a campaign confirms the fact that Syria became safe after most of its territories have been liberated from terrorism ,and aims to encourage Syrian refugees to return to their homeland.

The campaign of encouraging Syrians to return to their country and participating in its reconstruction kicked off in streets of Copenhagen and spread in more than one European country, which tried to exploit the file of Syrian refugees and invest it in the political bazar against Syria, and its people, aimed at supporting terrorism in the country

The British Guardian newspaper noted that Danish authorities rejected nearly 186 orders of renewing the temporary residence in the country since last summer, noting that this step is justified according to reports referring that the security situation in several areas of the country had “improved significantly”.

Denmark’s immigration minister Mattias Tesfaye told French Press that ‘We have made it clear to the Syrian refugees that their residence permit is temporary. It can be withdrawn if there is no need to renew it.”

The file of Syrian Refugees constituted a platform to put pressure on the Syrian state by Western countries and the Turkish regime who put obstacles to hinder the return of refugees to their home regardless of security stability achieved in Syria after the Syrian Arab Army had liberated wide areas from terrorism.

The Syrian government called more than once the displaced Syrians and the Syrian refugees to return to their homeland with providing them with all facilitations to guarantee their return in a safe way ,in addition to organizing an international conference to intensifying efforts to help the return of the displaced and refugees , yet most western countries refused to participate in it and insisted to continue using the displaced card in its war on Syria.