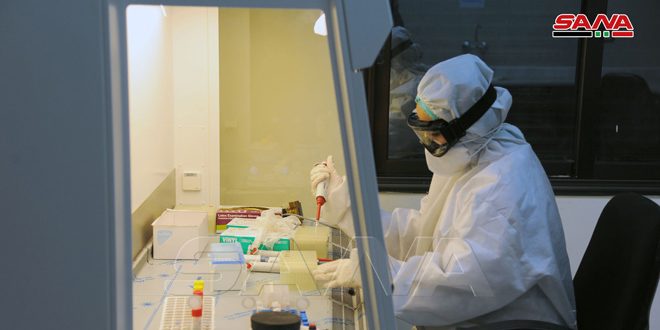 Damascus, SANA –A new increase in number of registered Coronavirus cases confirmed by PCR, where a highest outcome was recorded during the current month according to Health Ministry ‘s data on Thursday after days of stability of the cases.

Director of Readiness, Ambulance and Emergency Department at the Ministry, Dr. Tawfiq Hasaba told SANA reporter in a statement that at the beginning of the current month, there was a coronavirus infection rate flat, yet during the past two days, an increase in the number of infections appeared , as 158 cases were registered on Thursday which is the largest daily toll recorded .

The number of registered cases which have been conducted the PCR tests, were cases being treated at home.

Hasaba pointed out that the hospital beds are full of corona’s patients and suspected ones,adding that intensive care units in hospitals are full at 98 and 100 .
He called for adherence to hygiene measures, wearing a mask and achieving spatial distance.

The number of registered infections in Syria with the Coronavirus has reached up 20,713 until now, of which 14,469 have recovered and 1,414 cases have passed away .