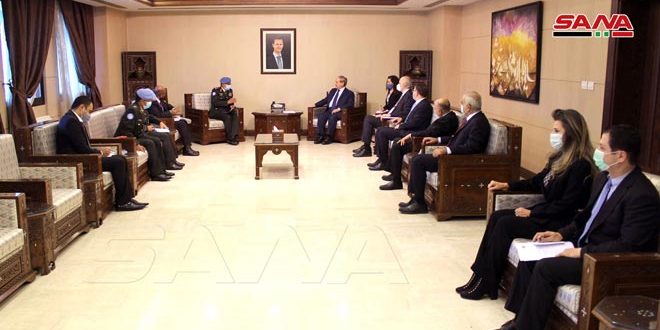 Damascus, SANA – Foreign and Expatriates Minister, Fayssal Mikdad, affirmed the importance of revealing Israeli violations of the Agreement on Disengagement,  represented by “Israel’s” repeated attacks on Syrian sovereignty, referring to Syria’s firm right to return the occupied Syrian Golan until the line of June 4th, 1967.

Mikdad, meeting Commander of United Nations’ Disengagement Observer Force (UNDOF) in Golan ,Major General Ishwar Hamal and the accompanying delegation, stressed Syrian government’s firm stance in providing support to UNDOF to fully implement the custody it is commissioned with, particularly observing the disengagement and revealing Israeli violations of the Agreement on Disengagement, represented by Israeli repeated attacks on Syrian sovereignty. He added the attacks include those that take place across the disengagement line or across Lebanese territory, in addition to the Israeli support to armed terrorist groups.

Mikdad also underlined Syria’s firm right to return the occupied Syrian Golan to the line of June 4, 1967, which is a right guaranteed by Security Council Resolution no. 497 and many relevant UN resolutions that affirm the occupied Golan is part and parcel of the Syrian Arab Republic.

He condemned US President’s proclamations that ignore UN resolutions which recognize the Golan as an occupied Syrian Arab land.

For his part, Major General Hamal stressed the commitment of UNDOF to its custody offered by Security Council to it, and observing the ceasefire line in the disengagement area.