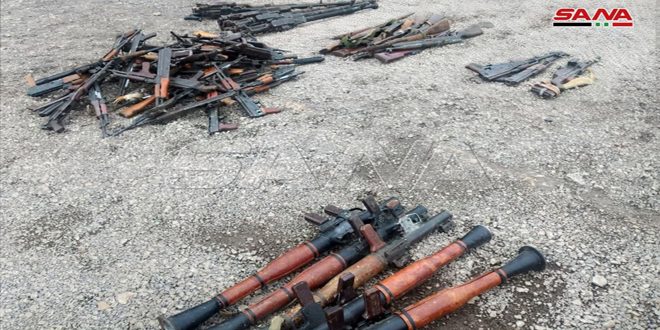 Daraa, SANA-While continuing work for securing the areas in Daraa eastern countryside, the competent authorities have found weapons and ammunition including RPG launchers left behind by terrorist organizations who had fled the region thanks to the heroism of the Syrian Arab Army.

A source at the competent authorities told SANA reporter that during the completion of combing a number of farms liberated from terrorism located on the administrative borders between the provinces of Daraa and Sweida in Daraa eastern countryside, they found amounts of weapons, ammunition and shells left behind by terrorist organizations.

The source added that among the seized weapons were military rifles, medium machineguns and RPG launchers, in addition to amounts of various ammunition, pointing out that the combing operations will continue till finding all the weapons and ammunition left behind by terrorists, and removing them to preserve the lives and security of citizens in the province.

The competent authorities, in cooperation with the army units, continue to comb and secure areas liberated from terrorism to ensure a safe return for the citizens and a normal life for civilians who work in their land and practice their normal life in their areas after liberating them from terrorism.