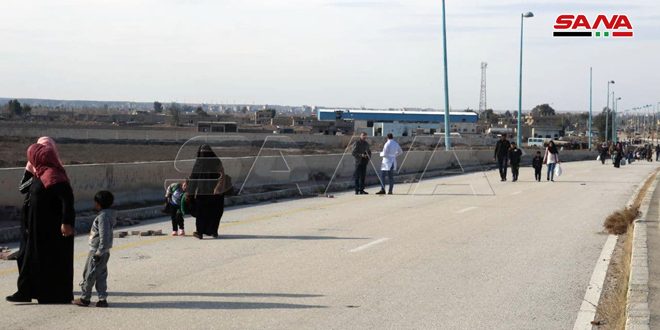 Deir Ezzor, SANA- After one year hiatus, al-Salhiyya Land Corridor that links between the liberated areas and other ones in Deir Ezzor northern countryside and contributes to connecting the two banks of Euphrates, was reopened to facilitate the locals’ passage.

A number of locals in the area affirmed that reopening the corridor eases lots of burdens in terms of saving time, distance, costs and the movement dangers through the river’s corridors.

Salem al-saleh told SANA that reopening the corridor will ease his sons’ arrival to university as it was taking more than three hours but now it takes only half an hour to reach there. In turn. Abdul Aziz al-Thiab, pointed out that reopening al-Salihyya corridor serves all the sons of Deir Ezzor northern countryside regarding accomplishing all their transactions in the governmental institutions, receiving the health services at hospitals, or even travelling to other provinces.

Mayor of Hatla village, located in liberated Deir Ezzor countryside, Fadhel al-Dhaher, said that reopening the corridor will contribute to facilitating the return of families to their houses and villages in the province’s northern countryside.

Deir Ezzor Governorate took all procedures to facilitate the locals’ passage and put a medical point beside the corridor. Director of the health area in al-Husseinyya, Amar al-Shaikh, said that with reopening the corridor, a medical point was activated there through a complete medical staff provided with an ambulance that receive the families coming from the liberated northern countryside and offer the necessary medical services, especially regarding issues to contain coronavirus and the communicable diseases.