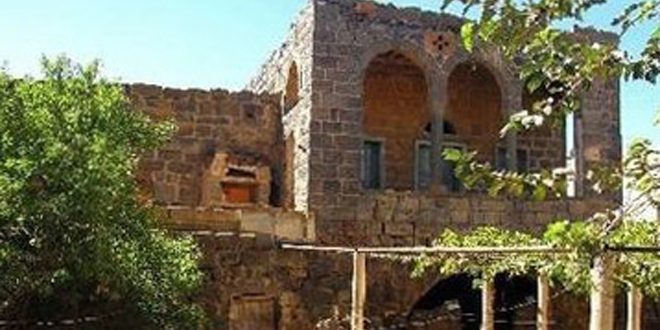 Sweida , SANA – Despite the variety and multiplicity of historical tales in Sweida province ,the ancient historical houses have another story which hide behind its doors the original architectural antiques in addition to memories where the tourist feel with fragrant history and narrate the tales of civilizations that passed throughout this region.

According to Researcher of Antquities, Hassen Hatoum ,most of those houses date back to the Nabataean, Roman and Byzantine eras where its houses external walls and façades were built of carved basalt stone that resisted the nature conditions and time .

One of those houses in Qanawat town consists of basement and two floors, represents a model of the Roman era houses ,including internal courtyard paved with stones surrounded by porches as most of its ceilings are in the form of carved tiles, according to Hatoum.

The stairs of those houses are of stone tiles planted in the walls, while the doors and windows are stone carved either in the form of a shutter or two shutters which spread in most of the archaeological sites of Swida ,and there is a door in Malah town with two shutters with 260 cm high and 117cm wide, with two shutters in Um al-Harteen village with 235cm high and 90cm wide.