Al-Jaish team comes first in the Will and Life Marathon 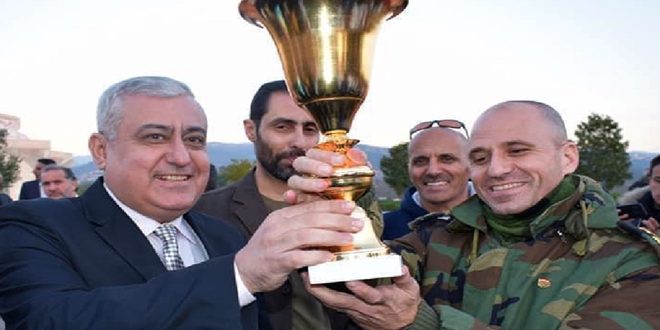 Damascus, SANA- Al-Jaish team came first in “the Life and Will Marathon” which kicked off from al-Assi Square in Hama and reached the tomb of the late President Hafez al-Assad in Qardaha.

The marathon was organized by Athletics Federation with participation of 14 teams from all Syrian provinces, in addition to Al-Jaish team.

The team coach, Colonel Shadi al-Dakhil told SANA that the team prepared well for the marathon and exceeded all teams, referring that the competition was tough, especially with Damascus and Damascus Countryside teams which came second and third sequentially.

He added that the marathon lasted for three hours and 40 minutes and Al-Jaish members managed by patience and endurance to reach the end successfully.

The marathon distance amounted at 120 km as freestyle relay and it started from al-Assi Square in a track passed by Mharda, Salhab, Nahr al-Bared till it reached Qardaha city through al-Sha’ara Summit road.