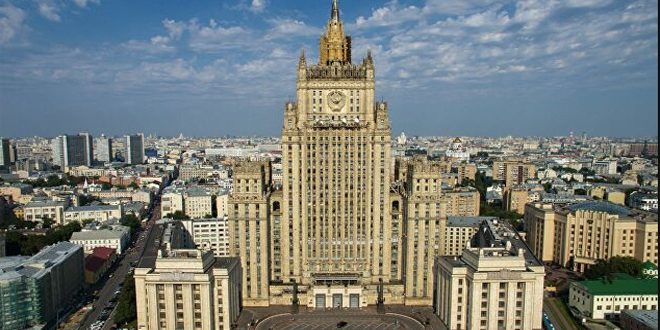 Moscow, SANA_ The Russian Foreign Ministry announced on Wednesday that the next meeting of the Russian-Syrian Joint Governmental Committee will be held in Damascus in the first quarter of 2021.

“The meeting schedule includes an exchange of views on the developments of the situation in and around Syria, with a focus on the tasks of promoting the political settlement on basis of the UN Security Council Resolution no. 2254, including the work of Committee of Discussing Constitution in Geneva.” Sputnik quoted the ministry statement.

The ministry underlined the need to respect the sovereignty, unity and territorial integrity of the Syrian Arab Republic, and adhere to the right of Syrians to independently determine the future of their country without any external interference.

The Syrian-Russian Joint Permanent Committee for Commercial, Economic, Technical and Scientific Cooperation, during its 12th meeting on the twenty-fifth of December last year in Moscow, inked the final protocol of the meeting and an agreement for cooperation in the field of customs facilitations between the two countries.