President al-Assad at a meeting for religious scholars: Religion forms the essence of thought as it influences all aspects of life 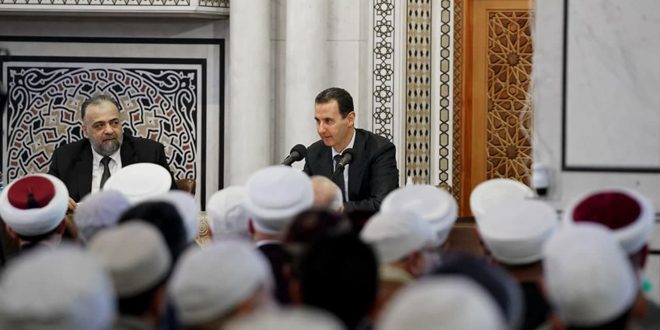 Damascus, SANA-President Bashar al-Assad on Monday participated in a meeting held by the Ministry of Endowments at al-Othman mosque in Damascus for religious scholars and clergymen.

President al-Assad said that what defines the capability of societies to face the destructive storms are the factors of stability and fortifying it from mental infiltrations.

The President highlighted that ” a society’s adherence to religion can only be measured through the moral commitment of this society and the behavior of its citizens.”

He underlined that the security and livelihood issues are reversible ones which would be removed when their causes are removed while the issues of ideology and thought are chronic ones, so in the issues of thought, it is hard to abandon what would be acquired, likewise, it is difficult to restore what we may lose. 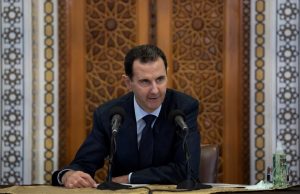 President al-Assad said that when we talk about Thought, today this thought is religion.. religion forms the essence of thought because it influences all aspects of life -mentality, behavior and emotions, to the past, present and also to the future, so it is enough to ruin this thought in order to ruin societies.

“This has been taking place since nearly a century or more, and overall, after a hundred of years, enemies of the societies have achieved big successes in this domain… and the religion which has been descended to be as a tool for the development of societies, instead, it has been used to be as a tool to ruin those societies… here I want to assimilate the situation and the world in which we live as a large ocean… huge waves that strike in all directions… strike security through terrorism… strike economy through siege,” President al-Assad said.

The president went on to say that let us start with our responsibility, normally, when those offenses would happen, such as the last offense, offending our beliefs and symbols, the first natural response to any assault or offense is a decisive condemnation and decisive stance. 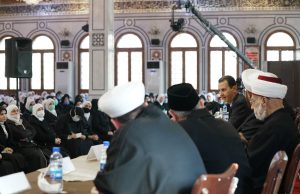 “But Why any changes have never been made… why those offenses continue… because we only express anger… all what we make revolves around our emotions, not around our interests and when we talk about our interests, they can’t be separated from our ideologies ” President al-Assad said.

“Between the offense and the offense, condemnation and anger, the religion turns into a ball that is kicked by the opportunistic politicians… the first in France who will have elections next year and he wants to attract those who are infected with Islamophobia.. and the second has elections in 2023 in Turkey… Erdogan.. and he has no longer lies that could convince his people in, so he has decided to make himself as a protector for Islam,” the President said.

“But actually all what is happening is a mere reaction.. they fight us through action , and we respond through reaction, , anger would achieve nothing, we have to confront, how and where to start this confrontation… the confrontation starts by knowing the real enemy and its whereabouts… the fact is that the first enemy doesn’t come from outside which means that whatever they have offended or plotted, they can’t,” President al-Assad said.

” We have intuitive and self-evident ideologies that we have learned since we were at schools, and it is supposed for any Muslim to have the minimum point of belief… those intuitive ideologies are existed in his/her mind… religion has come to support and save humanity ,” the president said.

The President added that one of the self-evident ideologies that we all know is that prophets are greater than to be offended and they are more stronger than to be weakened, so it is not permissible to accept that the prophet has been offended.

President al-Assad affirmed that the killing of innocents is one of the grave and evil sins, the siege of Iraq in the 90th followed by the invasion of Iraq in 2003, reaching to Yemen, Libya and Syria, asking how the Muslim express anger over a speech for ribald persons and doesn’t get angry over the grave sins… where are the demonstrations.. where is the outrage… where are the actions to defend those innocents and prevent those evil-sins. 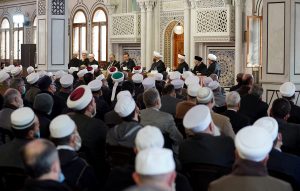 He affirmed that “We are in a state of war… this war might be economic, or it could be military, and it would be in thought which goes towards beliefs, but if we want to confront, we have to be like a solider in his post, the soldier must take the right position, direction and method in order to win the war.

He added that the danger always comes from inside, the danger comes from extremism, backwardness and the inability to have correct and right mentality. “As for terrorism, I didn’t talk about it and didn’t say that terrorism constitutes danger because terrorism is a mere result, not a reason,” President al-Assad said.

The President affirmed that terrorism is not an Islamic product, the Western society has stirred terrorism in the region, and the most important point is that part of terrorism, which strikes there in Europe, has no relation to the terrorism existed in our region, they have brought in the Wahabbi mentality in turn for the petro-dollar, in turn for money and they are paying the price now.

The President added that the neo- liberalism now resembles the talk about marketing the democracy by the US. 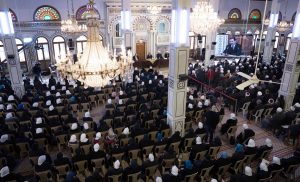 “They use democracy in order to dominate peoples and they use human rights in order to wage wars… they have used the neo- liberalism which has begun to develop since nearly five decades in a gradual and malicious manner like cancer,” President al-Assad said.

The President added that the neo-Liberalism method is to reject the beliefs as it demands from Man not to belong to any religion or belief, its method is to turn the individual reference from collectiveness- as the natural case for all humanity- into individuality. 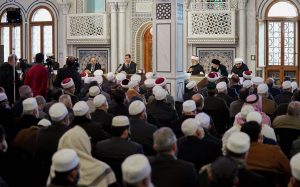 “If they wanted to realize the political collapse, they have to realize the social collapse… and here comes the role of religion… religion without a right society has no real meaning,” the President said. 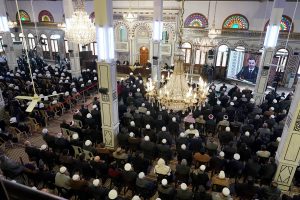 He added that at the same time, it is not possible to talk about a right application for religion without a right interpretation that expresses the challenges of this stage, it is the starting point to a right understanding and also combating extremism through the right application for religion, the understanding, application and combating extremism. As for Arabism, President al-Assad said that the role of Arabism is central and it is in the core of this culture, that means we can’t imagine the Islamic religion without the central role of the Arabs and this is a normal impact of the language and the culture.

“We all know that the war which used the religious idioms in Syria has begun before the military war, they hoped that the sectarian status will push people to carry the weapon and go to fighting, but when they have failed, they decided to go towards terrorism,” President al-Assad said.