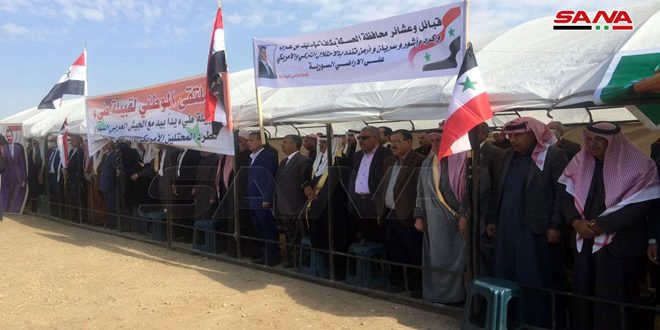 Hasaka, SANA_ The participants in the National Forum of the Arab Tayy Tribe rejected the presence of US and Turkish occupation forces, expressing determination to expel them from Syrian territories.

The forum was organized in Jarmaz town, Qamishli countryside, with the participation of a number of dignitaries and elders of Syrian tribes in the Syrian al-Jazira.

The tribes’ dignitaries, in their speeches, denounced the looting of the Syrian resources by the occupiers and their militia which exacerbates the situations of the Syrian people who face an unjust blockade and economic sanctions imposed by the US and Western countries to force them Syrians to abandon their national positions.

“The forum conveys a message that we will stand firm and resist to achieve victory and expel all foreign forces which loot the resources of Syria and hunger its people,” they said.

They also stressed that the Syrian Arab Army is the guarantor of Syria’s unity and stability.

Coinciding with the start of the forum, the locals in Jarmaz staged a popular protest to demand the expulsion of the US and Turkish occupation forces.

The protestors raised banners with phrases demanding the international organizations, which put human rights on top of their priorities, to consider the negative impacts of the unjust blockade imposed on the Syrian people.