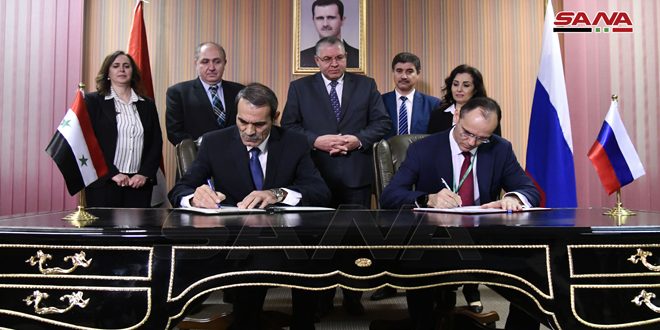 Damascus, SANA- The Syrian and Russian ministries of education have signed a cooperation agreement in the domain of public, vocational and supplementary secondary education with the aim of enhancing the cordial relations and the close educational ties binding the two countries in an embodiment of the two people’s common desire.

According to the agreement, the two sides shall work on developing the direct communication between the Russian and Syrian vocational institutes, and they shall provide the information and the required support to facilitate this cooperation.

The two sides shall also facilitate the exchange of experiences in the field of public and vocational education, and the supplementary education for the children in both countries.

In a statement to journalists following the signing of the agreement, Education Minister Dr. Darem Tabbaa affirmed that the agreement contributes to meeting the requirements of the educational process and exchanging visits so as the new generation will be able to understand the solid Syrian-Russia relations in appreciation of the efforts exerted by Russia over the past years for restoring security and stability to Syria.

Dmitry Glushko, for his part, noted that Russian will help Syria through building new schools and rehabilitating the schools which had been destroyed at the hands of terrorists to be able to receive more students, in addition to holding training courses in Russia for teaching the Russian language to the teachers and the administrative staffs.

He added that about 50 thousand students are learning the Russian language, but there are only 200 teachers for this language in Syria which is a small number, adding that this number will be increased, and new modernized curriculum for teaching the Russian language are being prepared in cooperation with the Syrian Ministry of Education.