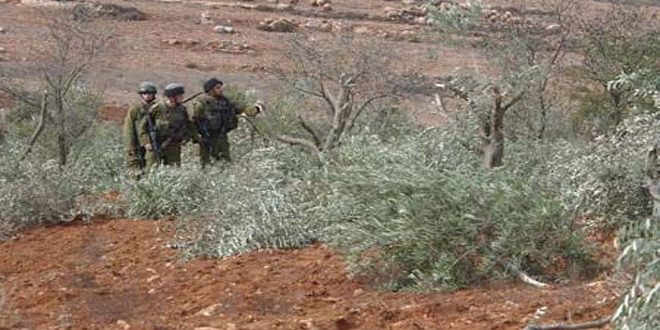 Occupied Jerusalem, SANA- The United Nations Office for the Coordination of Humanitarian Affairs (OCHA) affirmed that the Israeli settlers have burned 1000 of olive trees and robbed huge amounts of the crops in the West Bank over the last two weeks.

Palestinian Wafa News Agency quoted the office as saying in a report titled “Protection of Civilians”, which covers the period between the 6th to the 19th of the current month, that Israeli settlers set fire to 450 olive trees in Ya’bad town in Jenin and more than 500 trees in Saffa village west of Ramallah and 30 trees north of Barqa village to the north.

The report noted that Israeli settlers robbed large amounts of olive crops in the West Bank and attacked the Palestinian farmers while they were reaping the olives as 85 Palestinians were injured.

The report pointed out that the occupation forces curried out 126 storming operations and arrested 132 Palestinians in various parts of West Bank and razed a large areas of the Palestinians’ agriculture lands, south of the Gaza strip which led to destroying several agriculture dunums and irrigation systems.