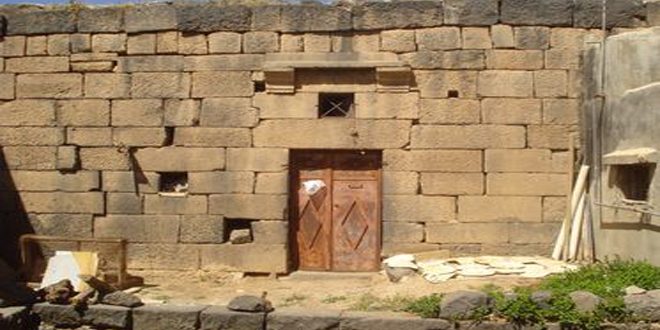 Sweida, SANA- Amer house is a large archeological house which is situated in the northwestern end of al-Heet village in Sweida countryside and is considered to be as one of the most important archeological buildings in the area. “ The archaeological house represents a large residence with a length of 42 meter and a width of 36 meter and an area of about 1512 square meters and it consists of three buildings,”
Chairman of the Excavations and Archaeological Studies Division of Sweida Archeology Department, Khaldoun Al Shamaa told SANA.

He added that the most elegant ceilings in this antique dwelling are based on quarter-round scales, while the entrance to the hall with arches on the ground floor is equipped with a window in an analog manner, indicating that the main building in the antique house contains an arched hall supported by side rooms in the first floor while underground floor can be accessed from the yard via a vertical staircase leading to the corridor.

Al-Shamaa added that above the hall entrance preserved in ground floor, there are quarter-round scales and its door equipped with a small window opened to chamber with arches.
He pointed out that the arrangements of this large building were built on small halls with surrounded arches, it was likely a formal building.

This archeological house includes porticos, vertical stairways, vestibules linked the rooms with each other’s, stables, manger, stone reservoir and long hall, and its ceiling was raised by three huge arches.
Al-Heet village is located to the east of Shahba city which contains two archeological churches dating back to the middle fourth century AD in addition to ancient houses from different historical stages.