Al-Jaafari: Syria has faced terrorism in defense of the values of human civilization 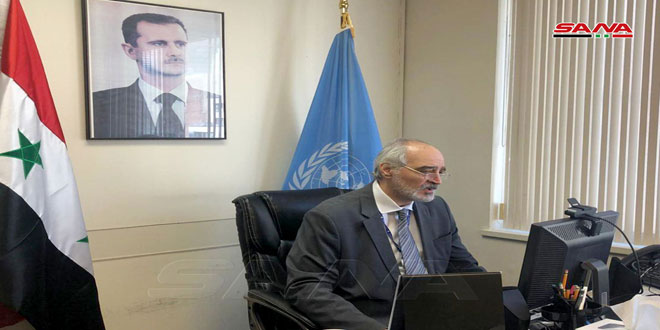 New York, SANA-Syria’s permanent representative to the UN, Dr. Bashar Al-Jaafari, affirmed  that  Syria has stood in the front lines against terrorism, not only for self-defense, but also in defense of  regional and international peace,  the  values of  Human civilization and the principles of international law, pointing out that Syria is a  victim of economic terrorism that contradicts the international law.

“Our countries have agreed, since Bandung Conference, to achieve a more secure world, prevailed by peace, justice, t, solidarity and cooperation, based on respect for the sovereignty, independence and territorial integrity of states,” al-Jaafari added in a statement to the Ministerial Meeting of the Non Aligned Movement (NAM) Bandung+65, held under the motto “More Relevant, United and Effective NAM against Emerging Global Challenges, including COVID-19.”

Al-Jaafari went on to say that, “Today, after 65 years of its establishment, our movement collectively, and as individual countries, are facing many challenges that go beyond the national scope to the regional and international levels.

AL-Jaafari pointed out that in addition to terrorism and direct aggression , many of the movement’s  countries , including Syria, have fallen victim of an economic terrorism being practiced by  a number of countries in violation of the  international law and the  principles  and purposes of the United Nations , as successive American administrations  have imposed coercive, unilateral measures on the Syrian economy and its vital sectors since 1978 in order to dissuade the Syrian stance that rejects hegemony and occupation .

The permanent representative of Syria indicated that those illegal measures targeted the Syrian citizen in all details of his daily life and limited the ability of the Syrian state’s institutions and their humanitarian partners from providing the basic services and supporting their citizens and improving the humanitarian and living situation.

Al-Jaafari clarified that despite that, the American administration and its allies insist to escalate their economic terrorism reaching to the so-called “Caesar Act,” with the aim of overthrowing the Syrian state, undermining its national choices and achieving what they were unable to achieve whether in the political or militarily domains.

He indicated that Syria is looking forward to the support of the movement’s countries in condemning and stopping the attacks of the illegal “international coalition”, Turkey and “Israel” and ending the illegal presence of any foreign forces on the territory of the Syrian Arab Republic.