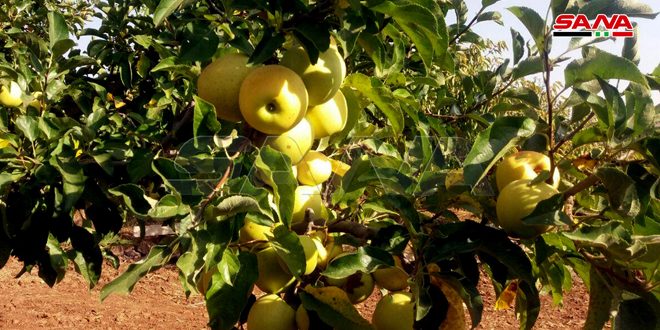 Qunaitra, SANA – The Agricultural Department in Qunaitra estimated the production of apple for the current season at about 4,866 tons. In a statement to SANA reporter, Director of Agriculture Directorate in Qunaitra, Hussein Sallan said that the cultivation of apple trees is concentrated in the northern part of the province mainly in villages such as Hader, gathering of al-Amal farms, al-Halas, Fawar spring, al-Kaum, Khan Arnaba due to the cold climate which the apple tree needs.

About 7,750 dunums are cultivated with apple trees mostly rainfed where the total area of rainfed trees is 5,816 dunums.

In the previous season, the province’s apples production reached at about 5,000 tons.