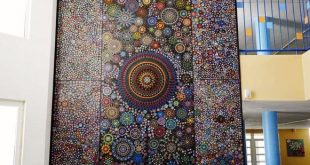 Hama, SANA-Russian-Syrian Business Council on Tuesday distributed 55 tons of foodstuffs among the families affected by the terrorist war and the families of the martyrs in Salamiya area in eastern countryside of Hama.

The Chairman of the Council, Dr.Louay Youssef said, in a statement to SANA reporter, that the two-day event, which is held under the motto “ To Salamiya city, from Russia with all Love ” comes within a series of regular humanitarian charitable activities which is going to last till the end of the current year and will include many Syrian governorates.
Yousef pointed out that 1000 food packages, including basic food supplies, were distributed in Salamiya area.

It is noteworthy that the Russian-Syrian Business Council distributes aid under the directives of the Russian Federation Chambers of Commerce and Industry in cooperation with Russian Federal Agency for International Cooperation (Rossotrudnichestvo) and in partnership with Russian gathering for developing friendship and business relations with Syria.

2020-09-15
nisreen
Share
Previous Archeological Shaqqa Monastery in Sweida … oldest model of convents that date back to 1500 years
Next Albarkieh in Safita.. a charming resort that smells basil