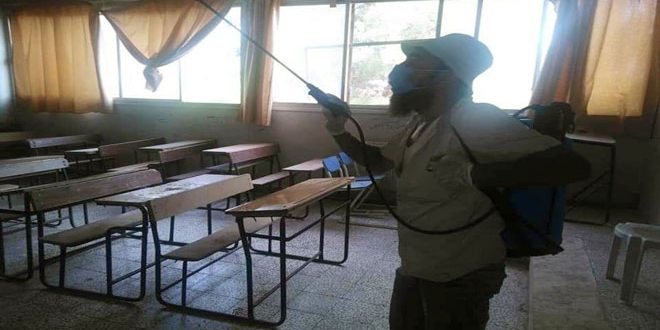 Daraa-Homs-SANA, The Education Directorate in Daraa has taken a number of measures and procedures in preparation for the start of the educational process on September 13th.

Head of the Education Director, Eng. Manhal al-Ammarin, stated in a statement to SANA reporter on Monday that the directorate, as part of the preventive measures to address the Coronavirus, has carried out a sterilization and cleaning campaign for schools and distributed sterilization materials to all schools, adding it had assigned a health supervisor for each school to follow up on students’ affairs and their health condition.

He added that the directorate will follow a new mechanism in distributing the textbooks by preparing them for the students at their school seats to prevent crowding, noting that the directorate has also produced the second batch of 4,500 masks for use in cases of necessity.The number of schools operating in Daraa is 749, and there are 211 schools out of service because they had been partially or completely damaged by terrorism.

Meanwhile in Homs, the city council has launched a cleaning campaign in the schools and at the streets leading to them in the city’s neighborhoods, in preparation for the start of the new school year.

Eng. Imad al-Saleh, Director of Cleanliness Department at the Council, stated in a statement to SANA reporter that the campaign included cleaning and removing weeds and dirt from the vicinity of schools in cooperation with the Education Directorate.

Saleh added that a sterilization and cleaning campaign was also launched at the public facilities and the classrooms in the schools and institutes which are affiliated to the Education Directorate within Homs city as a part of the precautionary measures to address the novel coronavirus.

Education Directorate in Daraa 2020-09-07
nisreen
Share
Previous Creation Myth Statue… A story of civilization narrated by Palmyrene temple of Bel
Next With notable decline in number of coronavirus patients admitted to hospitals…Have we passed the peak …?