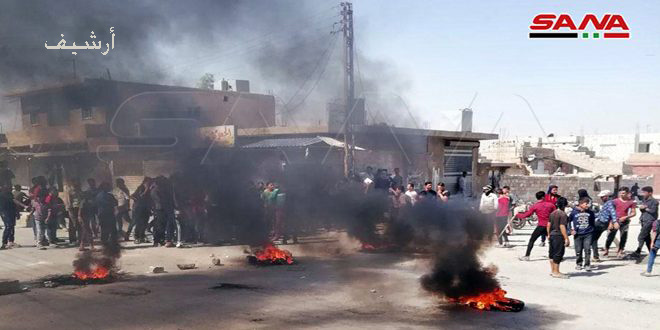 Civil sources said that QSD militia continued their kidnapping campaigns against the civilians in al-Jazeera within the so-called “compulsory military service” campaigns as their gunmen set barricades in Tal Barrak village in Hasaka countryside and kidnapped 3 youths to recruit them to fight in their ranks.

The sources added that three vehicles affiliated to the US occupation forces and five cars affiliated to QSD militia stormed in al-Rekad village to the south of Markada village in Hasaka southern countryside, kidnapped 4 persons and transported them via US helicopters to the US illegitimate base in al-Omar field in Deir Ezzor eastern countryside.

In a relevant context, a number of QSD militia gunmen were injured and a vehicle affiliated to them was damaged in an explosive device blast on al-Mankhar road, east of Raqqa city, according to local sources.
Hala Zain