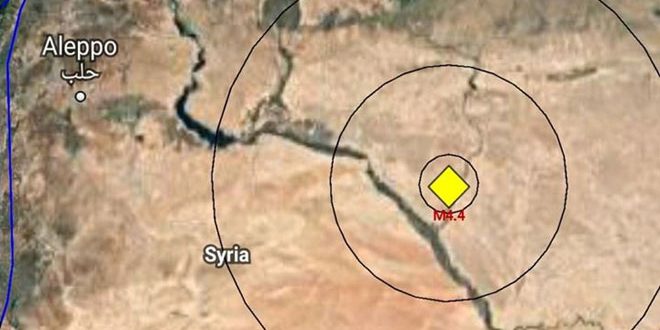 Damascus, SANA- The National Center for Earthquakes in Damascus said that a medium earthquake of a magnitude of 4.4 on the Richter Scale was registered 45km northeast of Deir Ezzor city on Tuesday.

The Center said in a statement that at 1:54 a.m., a medium earthquake of 4.4 Magnitude occurred at a depth of 10 km, 45 km northeast of Deir Ezzor City.

Several earthquakes occurred during the past months in several regions in Syria, the last of which were two earthquakes on the fourth of last June with magnitudes of / 3.4 / and / 0.2 / on the Richter scale, / 80 / km northwest of Aleppo City, according to the National Center for Earthquakes.