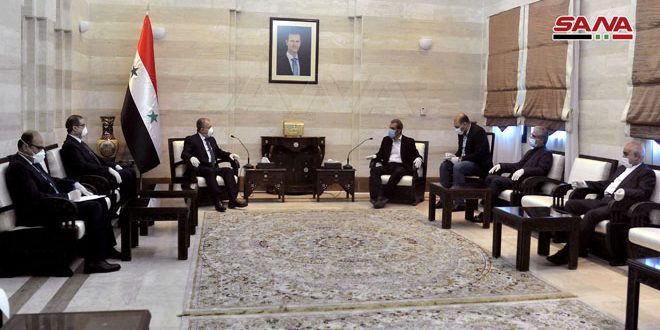 Damascus, SANA- Prime minister, Hussein Arnous, discussed with the advisor to the First Vice President of the Islamic Republic of Iran, Hassan Danaeifar, the necessary steps to enhance the economic cooperation in the face of the challenges and sanctions to which the Syrian and Iranian peoples are passing through, especially the so-called “ Caesar Act.”

Talks during the meeting dealt with mechanisms to enhance commercial exchange and develop cooperation in the field of research laboratories and medical equipment and infrastructure projects, development and investment.

Arnous affirmed that the Syrian-Iranian economic relations go with steady steps towards further development and close cooperation in implementation of the directives of the leaders of two countries. 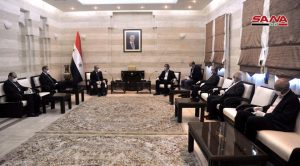 He clarified that the Syrian state is working with a comprehensive plan for agricultural development and expansion of agricultural and food industries to enhance the steadfastness of the Syrian people in the face of the sanction and the unfair siege.

For his part, Danaeifar, who is also Chairman of the committee for the development of Iranian Economic Relations with Syria and Iraq, asserted his country’s support to Syria in the face of economic sanctions.

He added that the meetings during this visit aim to provide support to Syria economically, indicating the importance of intensifying coordination between the joint committees to overcome all obstacles to achieve  economic cooperation.