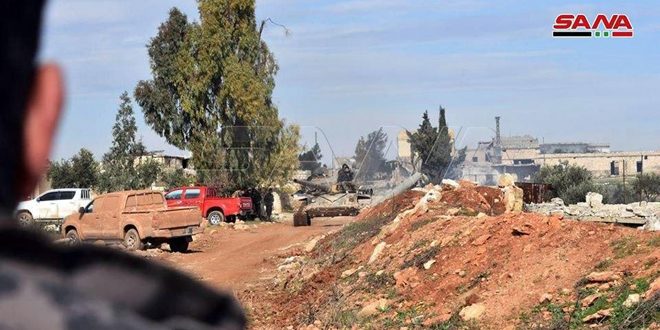 Aleppo, SANA – Syrian Arab Army units repelled a terrorist attack using car bombs before they could reach their targets west of Aleppo city, and continued to target Jabhat al-Nusra and groups affiliated with it in the direction of Khan Touman and al-Khalidiya town.

SANA’s reporter in Aleppo said that army units thwarted on Saturday afternoon a terrorist attack using 4 car bombs driven by al-Nusra terrorists at the outskirts of Jamiet al-Zahraa neighborhood west of Aleppo city, destroying the car bombs with precision fire before they could reach their targets.

The reporter said that as soon as the car bombs were destroyed, the army targeted with rocket and artillery fire the movements of terrorists in the direction of Jamiet al-Zahraa, inflicting losses upon them.

In the same context, army units have continued their advance in the direction of Khan Touman, targeting with various weapons the fortified positions of al-Nusra terrorists and organizations allied with it in the area overlooking al-Khalidiya town and the grain silos, inflicting losses in their ranks.

SANA’s accompanied the army units providing cover fire in the direction of Khan Touman, talking to the soldiers who affirmed they will continue to advance and target the terrorist organizations’ fortified positions to liberate the rest of areas from terrorism.

The soldiers pointed out that, on Friday night, the army units responded to a terrorist attack on the army points, killing and wounding a number of terrorists and capturing others.

2020-02-01
ghossoun
Share
Previous With her feet, Syrian girl makes the way of science and life
Next Turkish occupation, its mercenaries fire shells on Hasaka countryside