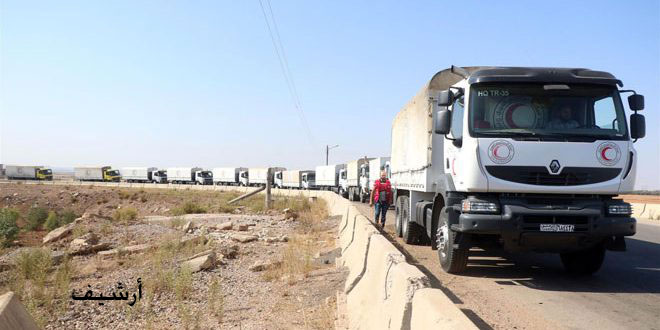 Daraa, SANA- The Syrian Arab Red Crescent (SARC)- Daraa Branch has distributed a new batch of food aid among the needy families in the northern countryside.

SARC-Daraa Branch Chairman Ahmad al-Masalmeh said in a statement to SANA reporter on Monday that ten trucks laden with 6,050 food and flour baskets entered the towns of Ataman, Khirbet Ghazala and Namer in Daraa northern countryside.

Al-Masalmeh added that this food aid comes in framework of the fourth batch which is backed by the World Food Program (WFP) which target the neediest families in all the provinces.

In the previous stage, the branch distributed an aid convoy among the locals in al-Sheikh Miskeen, as 5,100 families benefited from them.